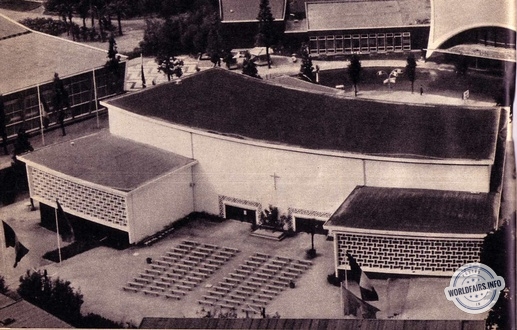 When you entered through the world gate and crossed the international section, the first palace that presented itself to you was that of the Catholic Missions of the Belgian Congo and Ruanda-Urundi.

A huge cluster of flags signalled its presence, while the main entrance was surmounted by pennants grouping the emblems of one hundred and fifty religious institutes.

On entering this pavilion - where all partitions had been removed - you immediately grasped the idea developed by the Catholic Missions, namely that missionary action was one.

Nothing particular to an institute or a congregation was presented there, but the whole Catholic work - the work of civilisation, welfare and hygiene.

The Africans themselves showed you what had been achieved - with their collaboration - by Belgium overseas; specialised Africans - chiselers, painters, turners, cabinet makers, typists, seamstresses, or employees of the education, press and health services - spoke to you enthusiastically about their achievements, their work, their projects, their hopes.

The synthesis of the action was presented to you thanks to modern techniques: films, photomontages, sound recordings, etc.

The whole presentation was based on the union of man, Church and State in the same work and towards the same goal, i.e. the concord and well-being of the African people.