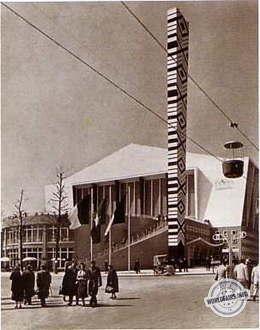 This monumental palace of 8,000 m2 had a façade of about 150 m facing the Avenue du Congo.

Eight doors gave access to the majestic hall of honour.

On each side of the hall were the granting powers: the Special Committee of Katanga and the National Committee of Kivu, while decorative panels marked the presence of Rwanda and Urundi.

The 300m2 fresco at the back of the main hall was the work of Mr Floris Jespers.

If you head to the left, the Science group presents the Congo with the help of a large relief model, dioramas and maps, showing the main characteristics of the climate, the water regime, the geology, the fauna and flora...

Many other disciplines such as geophysics and physical anthropology contributed to this presentation.

The arts took on a special face in the Congo.

You could find them on the other side of the hall. A whole body of European and, more recently, indigenous literature was focused on the Congo.

Below the gallery, various works of art from private collections and museums were on display; music, songs and traditional dances animated a bush setting.

Along the gallery, on the upper floor, European and indigenous painting and sculpture were represented.

From the main hall, via the main staircase, you could reach the upper floor where, from right to left, education and teaching, professional training, health, sport, tourism, information, the press, photography and cinema, the colonial administration, the Protestant missions and the social economy were grouped together.

All levels of education are to be found in the Congo, from primary school to university, without discrimination on the basis of race.

A large stained glass window illustrated the evolution of Congolese youth over the past half century.

All professional activities are open to them: this is what vocational training is all about.

Congolese art school students would show you their work in a relaxed setting.

In the health group, you could see on a large illuminated map the location of both government and private medical training courses that aimed to defend the health of the indigenous people against the scourges that plague the tropics and to improve their standard of living.

In order to be successful, this struggle requires that the general environment of the indigenous population be sanitised and that any threat of epidemics and diseases be detected in time.

The physical education of the indigenous people also aims to develop their health potential.

Europeans can practice all kinds of sports in the Congo, including hunting and fishing.

This is one of the reasons for the development of tourism.

An exceptional "show" was presented to you by the information: its "Congorama" retraced the evolution of the Congo, which, seventy-five years ago, was an unknown land.

Information plays an irreplaceable role in the education of the indigenous masses. You could see the power of its means: radio, press, cinema.

A listening room put you in touch with a broadcasting and recording studio where Congolese technicians and speakers worked.

In the Cine-photo group, you were invited to choose from among the photos on display those that best expressed the theme of the Exhibition.

As you leafed through the "Album of Man", you realised the similarity of human aspirations, whether European or African.

Photography is used for scientific purposes: an encyclopaedia of all activities in the Belgian Congo is compiled with the help of colour slides.

In addition, the cinema is used for cultural, spiritual and professional education as well as for the entertainment of the Congolese.

Now you move on to the colonial group: among the social strata in the Congo, the colonists form the independent class.

They are nevertheless helped in their settlement by the government's colonisation services.

A cross indicated the location of the Protestant missions. Three sections commented on their work: evangelism, social and medical work.

In the centre of the rotunda, a sculptural group by Jean Canneel represented the indigenous family reading the Bible.

On the ground floor, in a cinema that could hold 300 people, documentary films were shown to complete your information.

A restaurant and a café were available to end your visit.