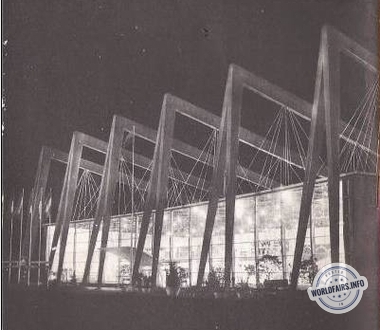 "Europe united in a progressing world" was the central theme of the European Coal and Steel Community Pavilion.

The many states from all over the world that participated in the exhibition showed their national wealth.

But among them, six European countries - Belgium, France, Germany, Italy, Luxembourg and the Netherlands - decided in 1952 to replace the age-old rivalries between them with a merger of their essential interests and to lay the foundations of the European Community, starting with coal and steel.

The Coal and Steel Community had existed for five years. Continuing their policy of a united Europe, the six founding states established the European Economic Community and the European Atomic Energy Community in 1957.

For 160 million Europeans, Europe is a political and economic reality. Common institutions take binding decisions in six countries, under the control of a parliamentary assembly and a court of justice.

This profound transformation in the life of Europe, yesterday's Utopia and today's reality, was illustrated by the European Community Pavilion.

Twelve architects and decorators from the six countries of the Community and more than eighty experts took part in the construction and decoration of this pavilion which, together with the results of the common market for coal and steel, expressed the will to unite the peoples of Europe and the contribution that a united Europe must make to the prosperity and peace of the world.