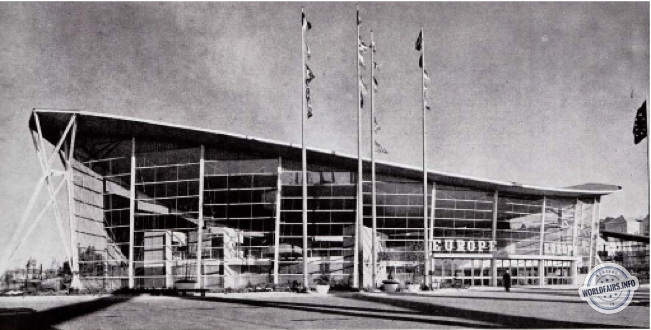 The Council of Europe was born in 1949 out of a vast current of opinion that emerged on the old continent in the aftermath of the World War, with a view to uniting the free countries of Europe.

The Council brought together fifteen democratic European countries and set out in its Statute to "achieve a greater unity between its Members for the purpose of safeguarding and realising the ideals and principles which are their common heritage".
The Europe Pavilion housed, together with the Council, the Organisation for European Economic Co-operation (O.E.C.E.) and the European Conference of Ministers of Transport (C.E.M.T.)
Conference of Ministers of Transport (C.E.M.T.).

One of the main characteristics of the Council of Europe is that it was the first international intergovernmental body in operation in which the elected representatives of the people participate directly by forming a Consultative Assembly. This is why the centre of the exhibition was a parliamentary hemicycle reminiscent of the Strasbourg hemicycle, of which it had the same proportions.

The glass walls surrounding it symbolised the public nature of the discussions held there, which enabled the press and public to follow the progress of the European idea and the achievements of the Council.

The ground floor, under the hemicycle, was devoted to a historical exhibition entitled "Man's conquest of his rights".

A ramp dedicated to the "international age" led to the Consultative Assembly of the Council of Europe.

The Assembly proposes measures to governments to strengthen European cooperation and the interdependence of member states; the Committee of Foreign Ministers, the Council's executive body, was symbolically represented next to the hemicycle.

The participation of the Organisation for European Economic Cooperation coincided with the tenth anniversary of its creation.

The O.E.C.C. stand in the Europe Pavilion, together with the Council of Europe, recalled how the 17 European countries had succeeded, by joining their efforts, in improving the standard of living of their populations over the last ten years, much more than during the thirty years before the war.

You were first reminded of the situation in Europe before 1939, to highlight the benefits that the peoples of Europe derived from the decision to join forces and rebuild their economies after the war. In 1948, American aid in the form of the Marshall Plan made the recovery programme possible.
You were then presented with the achievements of the O.E.E.C. over the last ten years: foreign exchange has developed, unemployment has almost disappeared in Europe, crises have been overcome and their effects limited.

There were proposals to create a free trade area.

Some parts of the stand were dedicated to productivity.

It was explained how the different governments work together to develop the European economy.

Work had been done by the O.E.C.E. to use nuclear energy for peaceful purposes.

As part of the O.E.C.E.'s participation, a stand was reserved for the European Conference of Ministers of Transport, which brought together the Ministers of 17 countries responsible for developments in the field of transport.

This development was accelerated by the need for reconstruction after the last war as well as by the requirements of modernisation and tourism.

Additional information on the problems discussed was provided by tapes in three languages.

For the first time, an overview was given of the major transport issues that were of concern to all national authorities.