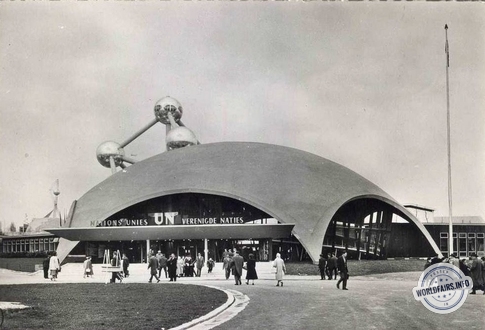 The representation of the UN family was built around a common theme: encouraging and developing cooperation between people and nations in the search for solutions to the problems that shape their lives.

The three main elements of the UN participation theme were presented in the pavilion:
The challenge, the action taken and the goals to be achieved.

At the entrance you see a representation of the globe around which the human races revolve, simulating an atom.

You took the left ramp and were then automatically guided through the fields of activity of the United Nations and the specialised agencies.


Special emphasis was placed on international co-operation under the aegis of the United Nations (General Assembly and Security Council), on work towards universal disarmament or conflict resolution (International Court of Justice in The Hague), as well as on the various means of economic development, such as the peaceful use of atomic energy.

The growth of the world's resources, which is of interest to the entire United Nations family, encompasses three fields of action: communications and transport, natural resources, and industrial progress.

The various agencies dealing with these issues were housed in the pavilion.

Other various activities such as currency stabilisation, reduction of customs barriers, asylum for refugees were also included.

During your visit, in addition to photographs, a miniature dam in operation, a large model of the General Assembly, a representation of air traffic on the North Atlantic, the functioning of telecommunications, an "atlas" of clouds and their influence on weather forecasts were offered for your interest.

At the exit, a post office sold a special set of 16 stamps allowing you to frank your correspondence on the spot. There was also a bookshop offering information on the subjects that had particularly interested you.

A cinema showed films from the various organisations.