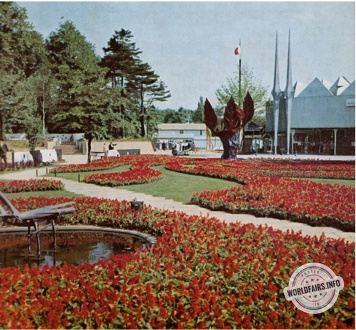 The Modern Garden takes advantage of a relatively small space between small pavilions that need to be enhanced.

The eastern part of the garden is slightly elevated and has been laid out as a resting place with numerous benches. It is supported by a 1.80 m high wall of undulating form.

A similar wall has been built on the north side to give the garden unity.
This part is decorated with a "tree of light", from which large arms of short, red plants emerge, as if from an octopus, which stand out against the green lawn. Square water tanks with duckweed swimming on their surface give the impression of the unified and immobile vegetation found on the surface of old abandoned ponds. The arms of the jellyfish go up the back wall and are extended by black bands.

Fabulous insects, in red copper, sleep on a grey-green pond.