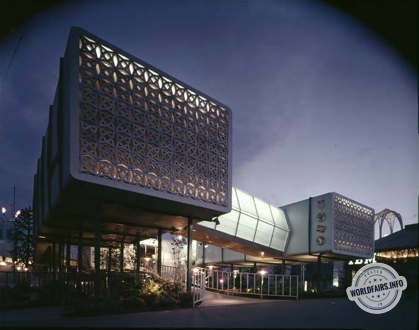 Transport 21, on Boulevard 21, was sponsored by four transcontinental railways linking Seattle and the Pacific Northwest. Its theme was the mid-21st century, when high-speed trains, powered automatically by electronics, will adapt to changing demographics and industrial production.

The exhibition was divided into three parts, each area presenting a stage of rail development, the Present, the last decades of the 20th century and finally after the 2000s.

In the first area of the exhibition, displays described the immediate future of freight and the new passenger facilities on the new railways. The highlight of this part was a demonstration of the use of electronic points in freight at the time. Visitors learned how electronically controlled switches simplified and increased the speed of routing trains through thousands of destinations around the country.

The second part was devoted to the high-speed regional rail transport of the future. The main attraction was a working model of the Levatrain, presented in cooperation with the Ford Motor Company. The "Levatrain" was a wheelless vehicle capable of transporting freight and passengers at speeds of 320 to 800 km/h. It floated in the air thanks to the power of its wheels. It floated in the air thanks to air cushions. The train was powered by turbines and ran on a special rail. Other displays described methods that could be used in the future to move large numbers of people from one place to another quickly, cheaply and safely.

The third part dealt with transport in the space age. A life-size model of a capsule was presented. Displays described how passengers enter the capsule and travel quickly from one remote point to another.

The four sponsors were Great Northen, Northern Pacific, the Milwaukee Road and Union Pacific. Many companies directly and indirectly related to the railroad industry cooperated in the preparation of this exhibition.