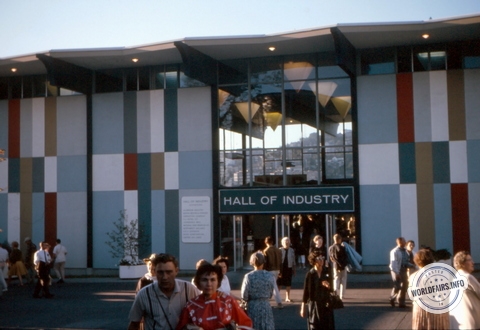 On "America's Way", south of the States Square, was the large and long hall of industry, where 10 industries were represented. Coloured plastic pyramids ran from the roof outside the building down to the ceiling inside.

There were entrances on each side of the hall. They opened onto corridors that led to the different exhibition areas. On the north side of the building, a glass wall overlooked the "States Square" and the "World Boulevards".

The largest exhibitor in the hall was the National Cash Register Company. It occupied an L-shaped area at the western end of the building. The company presented new products it had developed or those under development. The display included advanced models of cash registers, computers and registration tabulators for trade and industry. The exhibition also featured a new perfume-impregnated paper. In the rest of the exhibition visitors could relax while watching promotional films presented by the National Cash Register Company. The central wing featured exhibits sponsored by the H. J. Heinz Company and the S. C Johnson Company. On the opposite side were exhibits presented by the Aluminum Industry, Rohr Aircraft Company, United Air Line, Bekins Moving and Storage Company and Northwest Airlines. Occupying the far eastern bay of the hall was the Carnation Company.
Carnation displayed a graphic presentation of proposals and programmes for the nutritional requirements of an expanding world.
One of the most popular animations was the "Wonderful Milk Machine", an animated mechanical cow. This whimsical machine showed how the cow produced milk in a scientific way. Another lighted display showed the production process of the daily products. A fair was also located in this area.

Visitors to the Rohr Aircraft exhibition could operate an orbital station on various simulators.
Other displays included a full-scale missile, wide wings for supersonic transport and graphic presentations of Rohr's various aerospace activities.

The citizens of the 21st century, the children of today, posed for the photo exhibition sponsored by the Bekins Company. The photos told the story of a move in the 2000s. The United Air Lines exhibition featured an electronic booking machine, against which visitors could test their memory and speed. The H. J. Heinz Company graphically related how and where they produced their food products in the Pacific Northwest.