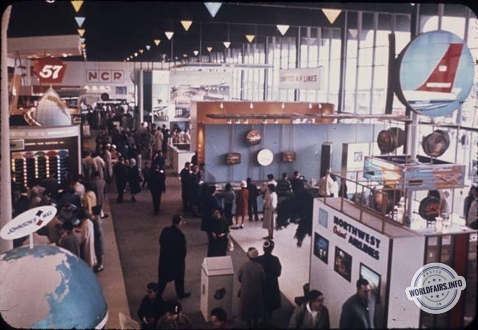 You could enter the Northwest Airlines exhibit either from the centre of the corridor or directly from the balcony on the north side of the industry hall. The overall theme was flying in the future. To develop this theme, the exhibit had five distinctive elements.

The Northwest 720B jet, built by the Boeing Company of Seattle, was detailed in two sections, which specifically related to supersonic jets. One display built around the 720B was a flight table, on which were installed four telephones that were connected to a special radio receiver. When a visitor picked up a phone, the display was activated. He could listen to a Northwest 720 aircraft through a series of simulated flight operations, take-off, flight, landing and runway manoeuvres. While the visitor listened to the explanation of these operations over the phone, he could see the operations performed by a model aircraft mounted on the flight table in front of him.

The second part of the 720B exhibition was an authentic cabin of the aircraft. Seats, carpeting and the interior of the cabin gave visitors the feeling of a flight during the take-off phase.
In the centre of the Northwest Airlines exhibit was a 6-metre high pillar where its rotating top indicated the flight routes used by Northwest Airlines.

The lower part of the pillar had illuminated scenes of the various cities Northwest serves, side by side, from Hawaii, Alaska to the Orient. Also, there was a unique animated map. By pressing buttons located on the tabletop panel, visitors could instantly see the flight routes of Northwest's planes and also know the flight time required to get from one point in the route to the other.

A Northwest Airlines agent was busy providing information to visitors about the company's services.