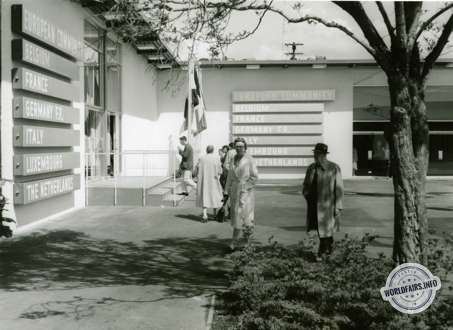 The six-nation European Community pavilion was located in the International Plaza.

As visitors entered, they were faced with screens showing films with telephones attached. By pressing the button and picking up the phone, the visitor could see and hear one of the leaders of the six member countries.

The same sound and image system was used in the same hall on the other screens, where visitors could see and hear the leaders of the institutions that together form the government of the community. A large map of Europe, a counter for hostesses and a decoration of flags completed the entrance to the hall.

The main part was divided into two sections. One area, under a canopy suspended from the roof, contained a series of displays relating the history of the community and its origins, objectives, organisational structure and implementation date.

The other was a series of 15 displays with scale models of typical EEC programmes in culture, engineering and industry.

The six countries were Belgium, France, the Federal Republic of Germany, Italy, Luxembourg and the Netherlands.