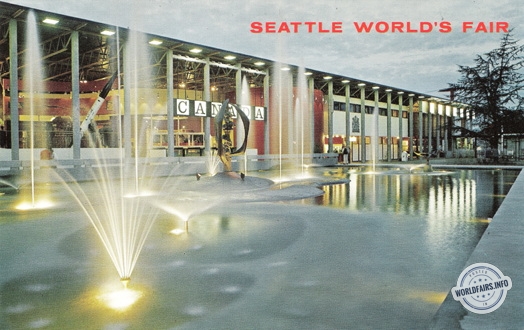 The entrance to the Canadian pavilion on the International Plaza was near the DuPen fountain.

At the end of the entrance was the information desk. Opposite, slightly to the left, was a graphic introduction to Canadian science. Paintings of Eskimos were displayed on the wall and on the right the theme of the exhibition was the Arctic.

Behind the paintings, a unique 10-minute animated presentation presented life in the Arctic for the next century.

A circular corridor led to another part of the exhibition, which had a model of a Canadian satellite. There were displays of maps and aerial photos of Canada. The next sections contained an advanced Trans Canda Airways' electronic booking machine. Also on display was a selection of electronic developments undertaken by the Canadian National Research Centre. To the right, and below ground level, was a 10 metre long glass tank used to recreate waves and test the design of dams.

Another curved wall contained an exhibit on medical advances in Canada, including a device to reduce the pain of childbirth and shorten the delivery process.
This was followed by a display of Canadian research into the peaceful use of atomic energy. The final section featured models and illustrations of transportation in Canada.