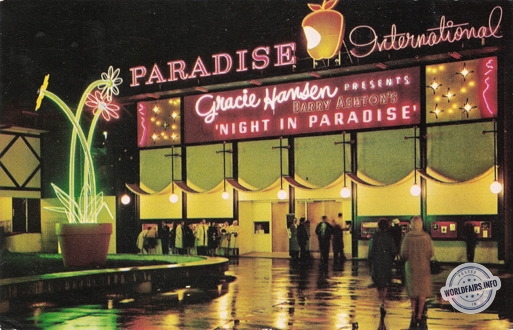 "Show Street" is "adult entertainment" in the exhibition. The name applies both to the street in the northeast corner of the fairgrounds and to the U-shaped building complex that houses the nighttime attractions.

At the beginning of the street is Gracie Hansen's Paradise International, a plush 700-seat theatre/restaurant. It offers four shows a night, described as "an extravagant production with the world's most beautiful girls, interspersed with internationally renowned performers".

Another "show girl" show on Show Street is called "Backstage, USA". Guests, standing or walking through the theatre, can watch the artists perform on stage. In addition, they get a glimpse into the artists' dressing rooms. The director of Backstage, USA, LeRoy Prinz, was co-choreographer for such films as "South Pacific" and "The Ten Commandments".

"Paris Specatular", a wax museum, presents 26 scenes from history: the greatest historical paintings. The wax figures were made by French sculptors.

Along the street is also a data processing centre, where an electronic "brain" system does handwriting analysis, and the Tepee Salmon Bar-beque, which serves salmon in an Indian setting.
Access to the Japanese village in front of the stadium costs $1 for adults and 50 cents for children.
Inside is an authentic replica of a Japanese temple, with 24 miniature shrines that are exact copies of the originals in Nikko National Park in Japan. A thousand handmade dolls are on display. It is said that it took 54 men 22 years to produce the dolls and shrines, at a cost of $2.5 million.

In another part of the village is a traditional Japanese garden, with coloured lanterns, arched bridges and waterways. Japanese food is served and goods from Japan can be purchased. The village features performances of the art of flower arranging. Two other shows have a more sporting activity: sumo, pearl divers at work in a tank with transparent sides.

Another state of mind and culture is presented in the adjacent Hawaiian pavilion. The building consists of 12 all-wooden sides and is built in a contemporary Polynesian architectural style. It resembles a large Hawaiian hut, stained in natural dark wood colours. The wall decorations and ornaments are imported from the islands.

There are two parts to the pavilion showrooms with space for 12 dealers selling products made in the islands, and a 600-seat theatre. Four performances a day by Polynesia's best artists are scheduled in the theatre. The Hawaiian Hilo play music for song and dance throughout the exhibition.

Floral fragrances fill the air and are reminiscent of the islands, all set to subdued Hawaiian music.

A third culture is presented in the Spanish Village Fiesta to the west. There is a presentation of the birthplace of the Spanish priest who established many of the first missions in California.

Back at the Quick Draw Theatre, in the Gayway's general area, young and old who want to test their speed with a gun against an electronic timer can do so. First, a film gives them lessons in the art of drawing a gun. Every hour, Arvo Ojala, a professional "shooter", demonstrates his highly developed gun skills. Holsters and a book entitled "The Secrets of the Quick Draw" are available for purchase.

"The Supreme Divers present a high dive show with a glass tank dive on Show Street.

"The Diamond Horseshoe, as the name suggests, is reminiscent of the 1890s in decor and entertainment. There is a saloon where beer, wine and soft drinks are offered in a Diamond Jim Brady atmosphere.

"Les Poupée de Paris" presents a puppet and magic show imported from Paris in a small theatre on Show Street. It features light-hearted and innocent skits for all ages.