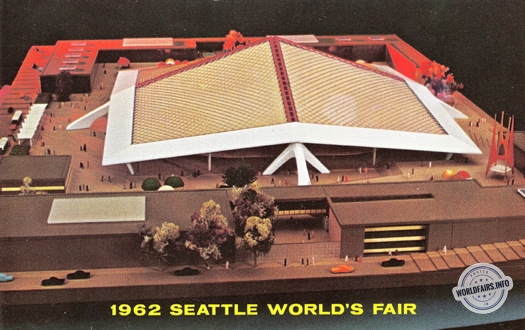 The Washington State Coliseum is located at the western end of the exhibition and offers a vision of the world of the future - the world of Century 21.

Under the gently sloping roof of the Coliseum, the designers have translated the combined vision of scientists, educators and philosophers about the future of man into dramatic visual terms.

Erected in the centre of the Colosseum, symbolically just out of reach and yet within reach of modern man's vision, is a structure of cubes bathed in light. In this cellular formation lies the promise of tomorrow, evoked from the knowledge of the present and the fulfilment of the future.
This thematic exhibition in Washington is entitled "Century 21 - The Threshold and the Threat".

Visitors ascend to an aerial exhibit in a globe-shaped lift, called the Bubbleator, for a 21-minute tour into the future, which includes a look at the city of tomorrow, the home of the future, and transportation, industry, food production, education, communication and entertainment in the 21st century.

The threat to our future is man's inhumanity to man, the only thing that could prevent us from moving forward into tomorrow.

On the ground floor of the Colosseum, around the perimeter of the 12,000m2 structure, are exhibits showcasing many of the products and services that scientists are predicting for the next century.

The Coliseum was funded by the State of Washington and built at a cost of $4.5 million. It was designed by architect Paul Thiry.

With its hyperbolic paraboloid shape, it has no interior supports. Four massive concrete-reinforced abutments support the roof of the building, which is 34 metres high, the equivalent of 11 floors. The aluminium-encased roof is supported by steel compression trusses and nearly six kilometres of steel tension cables.

At the end of the World Fair, the Colosseum will be transformed into a sports hall with 18,500 seats and a congress centre. It will be sold by the State to the City of Seattle to become one of the key structures of the new Seattle Center.

There are approximately 3,500 aluminium cubes nested on top of each other, each square is 1.2 metres, and comprise a total of 2,800 m2 in the state's grand themed exhibition. The cubes serve as windows to the past, the present and even more clearly to the future. About 48 km of aluminium extrusions are contained in these cubes.

The complex equipment of the house cubes includes sound and lighting devices.

The surfaces of some sections consist of three-dimensional film screens and some contain backlit models. The show is directed from three separate control stations enclosed within the structure.

The form of the exhibition has been chosen to suggest the interdependence of the different branches of science and technology in creating the environment for mankind in the next century.

Its designers describe it as "suspended nebulae-like a floating city."

The show is sponsored by the State Department of Commerce and Economic Development.