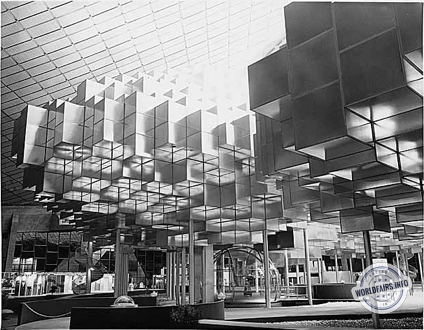 The journey through time and space in the "World of Tomorrow" thematic exhibition is undoubtedly among the most memorable and stimulating experiences for visitors to the Seattle World's Fair.

Here, the highest aspirations of 20th century man are transformed by theatrical alchemy into spiritual and material riches to be enjoyed by his heir, 21st century man.

But, as the title of the show emphasizes: the legacy of human prosperity and happiness is not guaranteed. The man of today must earn these rewards for his heirs, otherwise his inheritance may only be human misery and destruction.

The four entrances to the Colosseum lead to a presentation of past industry in the centre of the building, where the present is left as a step into the future.

In groups of 100 people, the audience crosses a bridge over a swimming pool and enters the vehicle that transports them into the world of tomorrow. Their means of transport is called the "Bubbleator."

Slowly the "Bubbleator" ascends through soft lights, whose colour changes continuously, and where new world music "The World of the 21st Century" surrounds the globe and its passengers.

Time is relative and in this case 39 years are compressed into 40 seconds as the Bubbleator ascends through the honeycomb of cubes that predict the future. The Bubbleator stops in a pool of golden light. Above the audience, in all its splendour, is an endless galaxy of stars to help light the way.

This is the prologue, the already past future of man, linked to the present and extending beyond to tomorrow and the day after and the day after that. The newborn child and the petals of a pastel-coloured flower opening to a new day are reminders of the link between the different generations of man.

Suddenly, the beauty of the images is marked by the threat of the future, dramatised by the vision of a family desperately waiting for help in an autumn shelter. But soon these people are gone, as the voice of a child from the future banishes their fate with words of compassion.

In a panorama that combines past and present, the traveller sees through time a series of photos - from the Acropolis and Columbus' fleet to the atomic cloud and Marilyn Monroe.

Then the ramp starts to shine into the future and the narrator invites the group to move to the next cubes, to the city of the future.

Clouds drift over the ramp, all bathed in a blue light like the sky. It is springtime in the 21st century and ahead, in a deep place, lies a city of the future on a mild spring day.

The city of the future is superimposed on a suggestive terrain of Seattle, but the current landmarks are identifiable and show striking changes in the composition of the metropolis.

It is the product of tomorrow by today's scientists, artists and visionaries. The city and its surroundings are essentially circular in shape, and where the Space Needle and the Washington State Coliseum are in harmony with the futuristic architecture.

Gradually, various features of the city are detailed point by point. There are complex transportation systems with jetports, monorails for rapid transit and highways with electrically controlled flying cars. Farmlands and recreational areas are illuminated and residential areas allow their inhabitants to live in a fairly large area.

As dusk settles over the city, the sound of its activity settles into a soft hum and the lights rise high into the sky.

Is this really a projection of the future or just a baseless dream, this city of tomorrow? In answer to the question, the walls of the room are illuminated and show examples of architecture already in existence or in the planning stage. The city of the future is not only possible, it is already in the making.

But the heart of a city is not its architecture, nor its motorways and jetports, vital as they are. The heart of a city is diffused in the many structures that give shelter to families, where individuals can share their joys and triumphs, their woes and disappointments.

A photograph of a future home acts as an invitation to move forward into the next series of cubes where the house of the future is waiting.

The house is in a rich wooded glade with vibrant summer colours. It is spacious and designed for relaxed living indoors, on the patio and in the outdoor courtyard.

Suddenly, the contrast between the best of the future and the worst of the present is highlighted with a presentation of a bleak suburban development with rows of identical soulless housing; an urban housing project with dark, grey buildings; and a decaying slum with a wooded section not with trees, but with TV aerials.

Inside the house of the future, a central unit provides heating, plumbing, wiring and automatic temperature control. A built-in vacuum system keeps the house free of dust.

The furniture is lightweight, made of plastic fibre, cement fibre and glass, and combinations of plastics, paper and light metals.

The windows can turn day into night or night into day at the flick of a switch and when it rains the windows close automatically.

The kitchen is a marvel of high efficiency, with solar ovens, wireless appliances and thermo-electric refrigerators. After dinner, there is no need to wash the dishes, they are disposable.

The colour scheme of the house can be changed with the lighting, by a simple turn of a switch.

The narrator says that the man of the future will be eager to return home at the end of his day at the office or factory. Perhaps he will commute to work in his own gyrocopter, which takes off from his own helipad. At this point, a gyrocopter model flies into the next cube, illuminated by gold, orange, rust and the red colours of autumn.

Colour film and transparent colour displays present the land transit facilities of the future. Monorail shuttle systems in the city and high-speed flying cars run on electrically controlled highways. There are no traffic jams and no crowded subways. The new transport facilities take the worker to the industrial areas unlike most cities of the present. There are no chimneys to pollute the air. Tomorrow's factories are automated and located in pleasantly landscaped industrial areas.

The office of the future will be a complete communication centre with devices that send letters electronically, automatic transmission machines for correspondence and machines that communicate with each other to exchange information, freeing up man for more creative activities.

As if in response to the problem of food production and distribution created by a growing world population, the cubes of the structure show another side of 21st century factories, factory farms.

Climate-controlled plastic domes cover farmland to produce crops year-round. Farms appear in what was once a barren desert.

The visitor sees another kind of farm; an offshore platform for agricultural processing and turning plankton into food.

The show dramatises the theme of the earth's abundance to be shared with all mankind, with images of families around the world enjoying food at abundant tables.

But man is hungry for other things, he cannot live on bread alone. The next century must also satisfy his hunger for spirit and soul. In the next cube, shining with the clear blue light of winter, are presented the harvests of the World of Tomorrow for education and communication.

The child of the future is curious, his mind full of questions about the new world in which he and the visitors find themselves.

In front of their eyes are images of state-of-the-art schools, colleges, universities, libraries and museums. Inside are some of the machines that will play a major role in transmitting the knowledge of the new world. There are open and closed circuit television sets, memory retention, data retrieval and translation machines. There are microfilms and magnetic tapes stored in libraries, which even a child, the child of the future, can operate.

They are electronic shops of knowledge of the past and present, shared by all seekers of wisdom throughout the world in free exchange. These are the gifts of modern sages, guided by a star of civilisation that shines above the viewer.

Now that the winter light is fading and new golden colours are appearing, it means a new spring of relaxation or, if you prefer, recreation.

Freed for the most creative endeavours by Century 21 technology, the man of the future engages in arts, sports and leisure, ranging from A to Z. Some are offered by cubes, representing each letter of the alphabet, which are illuminated to reveal 26 leisure activities.

In an opening at the bottom of the spiral ramp is a sculpted tree in shiny metal. When the lights play on it, it seems to grow.

The tree is "the symbol of today, planted for tomorrow."

Then the ramp lights up to go into the epilogue area, echoed by the ticking of countless clocks of the present time.

Once again, the images of the autumn shelter, for whom time is running out, appear.

Suddenly, the sinister ticking of the clock ceases, to be replaced by an equally ominous silence.

The narrator's voice is replaced by another. It is that of President Kennedy, with the words of his inaugural speech. They carry the message inherent in the theme of the exhibition, asking the audience to use the knowledge of the present to build a better world of tomorrow, a world free from the threat that obscures the future.

The thematic exhibition ends in a symphony of music and colour. The visitor descends the exit ramp and goes on his way to the future.