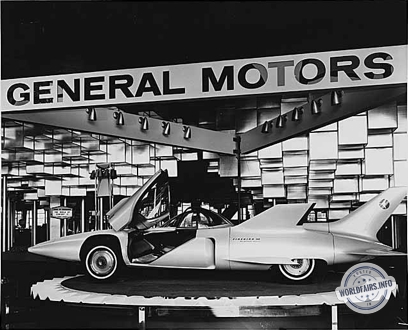 Revolutionary automotive concepts are already being tested and prepared for the world of tomorrow, and are on display in the General Motors Corporation exhibition in the Coliseum.

This 280m2 exhibition is located immediately to the right of the east entrance to the Coliseum.

The Firebird III, an experimental automobile with a fighter plane profile, is the star of the General Motors exhibit.
Powered by a gasoline turbine engine, the Firebird III is a fitting symbol of travel at Century 21.
There is no steering wheel in the Firebird III. A joystick control is located a few inches above the centre armrest and allows the car to be steered as it is moved to the left or right. Acceleration is achieved by pushing the stick forward and braking is achieved by pulling the lever back.

While the Firebird III may appear to be a "dream car", it is in fact a laboratory on wheels, in which advances for the cars of the future are tested.

This car has been tested both in the desert as well as in Detroit highway traffic.
Automatic guidance was also designed for the Firebird III. At the General Motors Technical Center, the Firebird III was safely guided without a driver by electronic pulses sent from a cable buried in a particular stretch of road and picked up by receivers that guide the car.

A model of an automated highway is another palette in the General Motors presentation. It represents a miniature segment of a real road. The model is the one from which engineers built an experimental 400-metre stretch of road in New Jersey for demonstration purposes.
Another display reveals the principles of ground effect machines, which allow heavy objects to move along a flat surface on a cushion of air. These principles are used for test equipment that requires virtually frictionless operation.

Visitors can participate in the General Motors exhibit by operating buttons that activate devices such as solar guns and an atomic reactor simulation.

The General Motors exhibit is a striking example of human automotive progress and its extension into the future.