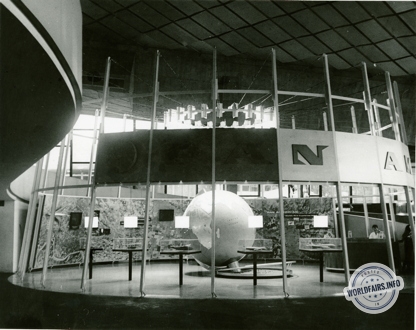 When the Wright brothers tested their first aeroplane engine driven at Kitty Hawk in 1903, they decreased the distances of the planet Earth. Since that day, the world's relative distances have continued to decrease as advances in aeronautics gradually reduce travel time.

The systematic shrinking of the earth's time space is presented in the Pan American Airways exhibit, located near the northwest corner of the Washington State Coliseum.

The exhibit is bordered by the exit ramp of the theme show. A huge rotating globe of light dominates the 130 m2 circular exhibit. The ever-shortening distances between the world's major cities, with Seattle as the focal point, are highlighted by the display.

Suspended above the globe is a sculpture representing flight, the factor that enabled man to measure distances between continents in terms of hours, minutes and seconds.

While simplicity is the hallmark of the Pan American Exhibition, it is nevertheless a challenging and futuristic expression of man's scientific achievements in the air age and the hopes of the space age.

Located at the base of the theme exhibit's exit ramp, Pan American has thoughtfully provided accommodation for those wishing to rest after their journey into the future.