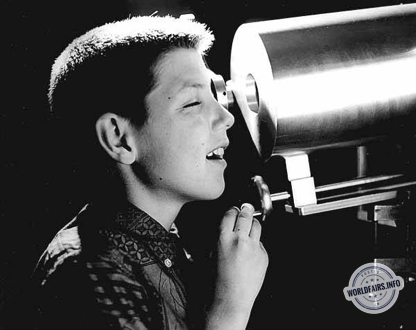 The visit to the US Science Exhibition begins with an introductory film in a room with a projection system specially designed by Charles Eames. A 10-minute film, entitled "The House of Science", introduces science, scientists and exhibits.
It uses a new projection technique. Seven separate films, running simultaneously through seven synchronised projectors, project seven images onto a multiple screen to make one composite image.

The film begins with an animated sequence in which science is treated allegorically as a constantly changing structure. Science is seen as a house in which a room grows over the centuries, increasing in complexity, size, but with one essential element, the inherent unity of the design.

The body of the film depicts the scientist at work. His laboratory can be anywhere, what matters is his curiosity and his ability to investigate. He has instruments to extend and correct the perceptions of his senses and tools to measure what he sees and feels. He records his findings and shares his knowledge with others who seek scientific truth. The environment in which he works influences his attitude and approach to nature.

In the epilogue, the film discusses the implications of the science that is closely related to the summations made in Zone 5. It ends with scenes of humanity as an introduction to Zone 2.