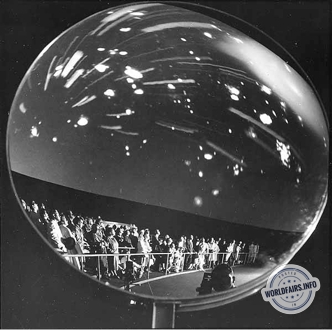 Four times an hour, a round trip of 20 trillion billion km through space begins and ends in this circular, auditorium-domed space.

This 10-minute journey simulates a trip to distant galaxies and what it would be like in reality to travel two billion light years.

Passengers - up to 750 per trip - take their seats behind curved handrails mounted on the multi-level floor. A voice, which has identified itself as the "central control of the spacearium", announces the take-off time. Background music and special effects are used to create the impression of doors closing and air escaping. The lights are dimmed and a narrator explains that in order to make the journey through time this 'shuttle' is travelling at 10 billion times the speed of light.

The theatre fades into near darkness, the music swells to a climax before the collapse and the dome shutters open to reveal the Earth in the afternoon sunlight. The journey has begun.

After following the curve of the Earth for a short time, the shuttle changes course and a full moon appears. The narrator explains: "A quarter of a million miles from Earth, our moon is a natural satellite of the Earth and consists of desert plains and mountain ranges...". The spacecraft turns slightly and the moon begins to pass over the dome. It fades as the constellations of Leo, Virgo, Libra and Scorpio come into view.

Another change of course and the sun rises to the left. As the shuttle approaches, the narrator speaks: "Our sun, our star, a gigantic nuclear fission 'oven' - converts four million tons of matter into energy every second."

Sunspots and solar prominences, large jets of flame that shoot out millions of kilometres, are clearly visible before the sun slowly recedes and lights up the sky with the colours of the arc.

Mars appears in the distance as a tiny red dot. It grows as it gets closer. "Fifty-million miles from Earth," the narrator explains, "we orbit Mars 'the red planet', named after the mythical god of war. Much colder and only half as large as Earth, Mars can support some form of life."

In the empty vastness between Mars and Saturn, only an occasional asteroid disturbs the darkness.
"And 800 million miles from Earth, Saturn appears," then the shuttle passes between the coloured rings as Pluto, the solar system's most distant planet, looms in the distance.

"From there, there are vast expanses of space. On the route we are taking, the first nearby star is 60 million million miles away from our solar system.

Then a double star, a giant red sun and a white dwarf appear.
Also in space, clouds of light result from billions of separate stars that make up the Milky Way, Earth's galaxy.

When the shuttle sets a new course, the Spacearium control centre says: "We are leaving the Milky Way galaxy and setting course for Andromeda, please grab the handrails".

Before entering Andromeda a star cluster appears. Looking back, the Milky Way appears as a whole, filling the lower half of the screen. Then in front, Andromeda grows.

"And now we approach Andromeda. Our galaxy's twin sister, this colossal galaxy like the Milky Way, contains 100 billion stars, each in a huge orbit" says the narrator.

In this small spiral galaxy, a supernova begins to grow. A cosmic nuclear explosion, the supernova creates a brightness greater than all the other stars in its galaxy combined.

Then the Spacearium control reports: "We will now set course for earth. The return journey is only a matter of seconds, past Venus and Mercury.

As it ends the shutters close on the dome and the theatre lights continue.
Then the lights come back on, it's the end of the journey

The Boeing Company of Seattle came up with the idea for this space travel planetarium and is the joint sponsor of the project with the US Department of Commerce. "Cinerama Inc. led a group of subcontractors who supplied equipment, projection lenses, and the screen, and Fine Arts Productions Inc. made the film.

The screen is an eight-ton aluminum Spacearium dome that is 23 meters in diameter and 11.5 meters high, with a total viewing area of nearly 750 m2.

The dome is suspended inside a rectangular envelope and the floor is slightly sloped to provide optimal viewing for the audience.

The projector, which has the world's widest angle lens, is housed in a slot in the middle of the viewing area. The new 70 millimetre glass lens was used to shoot the film, as well as project it onto the dome, at 360 degrees horizontally and 160 degrees vertically.

In the production of the film, Fine Arts Inc. built an extensive photographic library of space objects.

It worked under the direction of a group of astronomers and space scientists to make the production as true to life as possible, by depicting the stars, planets and other astral phenomena.