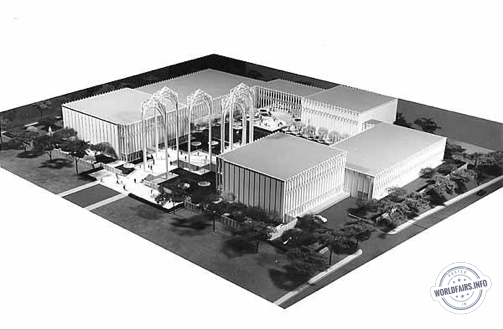 Up to this point, the story told in the US Science exhibition focused on the functions of science. The scientific approach to the search for knowledge was demonstrated.
Scientific knowledge inevitably leads to action. It enables man to harness the forces of nature, to lighten the burden of life and to extend the span of life. As it increases man's ability to act, to tame and control his environment

In zone 5, at the end of the history of science, the implications of science are examined. This is a monolithic exposition to reinforce an impression that only the dominant science and the resulting technology can be used by society and thus increase and broaden its horizons.

Four aspects of the implications of science are addressed here:
- Science and the individual.
- The control of man's physical environment.
- Science and the world population problem.
- The place of man in an increasingly scientific and technological world.

The entrance to Zone 4 follows a curved corridor until it reaches a major hub. As the stage slowly rotates around a central structure, a narrator addresses the topics listed above. Images about scientific truths are discussed and appear in window-like openings in the wall. At the same time, related images of some actual or potential applications of scientific truths are displayed in louvered openings on the outer wall.
The stage carries the audience through the exhibition to the exit and the visit to the world of science is completed.