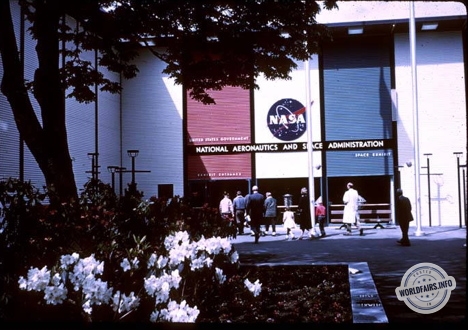 The peaceful exploration of space is presented by the National Aeronautics and Space Administration's exhibit in the southwest corner of the International Plaza.

The rocket exhibit is a sector of the science world.

NASA is making its first major attempt to graphically present the history of the United States space program. NASA, the aerospace industries and the exhibition have contributed more than $2 million to this presentation.

A tour of the exhibit, which familiarizes visitors with what has been and is being done in space, takes about half an hour. Fifteen trained guides are on hand to answer questions and provide information.

Introductory presentations explain the history of NASA and what they are trying to do. Beyond is a section devoted to models and mock-ups of satellites successfully launched and launched into orbit by the United States. Their names are familiar to most visitors: Explorer, Vanguard, Pioneer, Ranger, Mariner and Topside Sounder.

A display shows where NASA's tracking satellites are located and how they track the progress of artificial satellites around the earth.

It also reveals some of the information that the satellites are able to transmit to scientists.

The next section presents three-dimensional visualisations of propulsion systems in use or under study: liquid, solid and atomic. On the display are real rockets or reduced scale replicas.

One of the exhibits in the next section is the spacecraft in which Commander Shepard made the first manned American space flight. The section with the American manned spaceflight programmes, which has as its immediate objective the development of space vehicles to carry three men for orbital flights and lunar voyages.

Equipment and materials used in this programme - including a half-scale model of a three-man capsule - are on display.

Near the entrance is a small cinema which shows a continuous stream of films on space exploration, astronomy and rockets. Some of these are being shown publicly for the first time. There are daily changes in the film schedule. In addition, there are special lectures and demonstrations by experts in space research and technology.