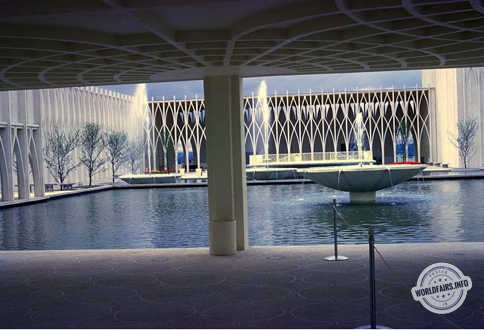 To show the variety and ingenuity of current scientific methods, examples of the work done by scientists on 25 research projects are displayed in this area, the largest in the US Science exhibition. The title of each of the exhibits is in the form of a question and are arranged in six groups according to subject.

The first exhibits explore the nature of our environment. Clockwise around the room other groups deal with: sources of energy; the nature of behaviour; the functioning of living things; the structure of matter; and the molecular basis of life. In the centre is an exhibition of model cells and a modern laboratory in which staff members carry out simple experiments for the public to see.

Group 1-The nature of our environment

Title: Where are the radio waves generated in the universe?
Experiment: A model radio telescope shows how radio waves from space are received and recorded. The length of the waves varies from 2.5 centimetres to 38 metres, depending on their point of origin in space.

Title: How can we see planets and stars more clearly?
Experiment: A model stratoscope and photographs show how astronomers use telescopes with balloons sent into the Earth's atmosphere to increase telescope efficiency.

Title: What are the electromagnetic forces around the Earth?
Experiment: The Earth's magnetic field captures charged particles from the sun that are associated with sunspot activity. The interactions of such particles with the Earth's radiation belts and ring currents cause auroras and interfere with radio transmission. These phenomena are studied with sounding rockets and simulated with models such as the stormertron, which is presented here, and with films of the aurora and the solar corona.

Title: How can we study the shape of the earth through satellites?
Experiment: The transit system of satellites and ground stations is expected to provide accurate information about the earth.

Title: What is the Earth's interior?
Experiment: The Mohole project, in which scientists are trying to drill into the earth's crust, is described.

Title: How can we make electricity more simply?
Experiment: There are many ways of converting thermal energy into electrical energy mechanically. Science is looking for a simpler method.

Title: How can we control nuclear fission?
Experiment: Attempts by scientists to imitate the burning processes of the sun are described.

Group 3-The nature of behaviour.

Title: What can salmon see?
Experiment: To discover why salmon migrate and how they are able to travel thousands of kilometres to spawn in their birthplace, science studies what salmon see and how they see it. The data presented in this exhibition suggests that, at a minimum, they can distinguish colours.

Title: What is behaviour control in animals?
Experiment: Day-old chicks are taught to follow any moving object, and once the response is "imprinted" the chicks follow the same object throughout their lives. In this experiment, conditioned responses are studied under controlled conditions.

Title: What leads to mother-child affection?
Experiment: 2 groups of monkeys were raised with real and surrogate mothers. This experiment shows how monkeys react to 2 types of surrogate "mothers". A nurturing mother made of steel wire, which feeds them, and a gentle mother made of other materials, which are softer and warmer, but which does not provide any nutrition. Animals raised with the alternative mothers prefer throughout their lives to choose the softer "mother" over the other and the food supply it can provide. They prefer the gentle relationship to food.

Title: How does heredity influence animal behaviour?
Experiment: Scientists have developed strains of mice with particular habits. One type prefers alcohol to water, the other likes to eat excessively and will grow excessively. This exhibition shows how scientists study these genetic effects and what they mean for humans.

Title: How do animals learn?
Experiment: Early man discovered that he could teach a dog a few tricks by rewarding him with pieces of food. In recent years, humans have tried to find out, on a scientific basis, how and when rewards can be best given. They have found that animals can learn some very subtle tricks. The pigeons in this experiment learned to distinguish different shapes. Various conditioning methods for animals are being studied.

Title: What are the teaching machines?
Experiment: Science is studying ways to improve and speed up the teaching and learning process. Some of the mechanical means have shown promising results. Some of them are described here.

Group 4 - How do living organisms work?

Title: How does a firefly produce light?
Experiment: The abdominal region of the firefly is dried and its various chemical components are isolated to determine which are necessary for light production. These are mixed together and reproduced in a "test tube" the light of the firefly. How this information was used as an analytical tool is also demonstrated.

Title: How can we accelerate nerve growth?
Experiment: Chemicals appear to determine the growth of certain nerve tissue. In this experiment, the chemicals are isolated, and their origins found.

Title: How do muscles contract?
Experiment: An electron microscope takes pictures of muscles. The study of the results of transplanting muscles from one individual into another reveals the suppression of the reaction.

Title: How is plant growth regulated?
Experiment: In an experimental garden, some of the plants grow under normal conditions, others have been treated with a growth retardant and some have been treated with gibberellin, which was discovered in Japan during the Second World War and is being intensively studied. The differences are marked.

Title: How does information come to our eyes?
Experience: A large model of the human eye and its pathways to the brain, a closed-circuit television and a machine that slices tissue so thin that it is invisible to the naked eye are all part of this exhibition, which shows what science has learned about how the visual system works.

Group 5-The structure of matter

Title: How can we see the structure of an atom?
Experiment: By scattering high-energy particles provided by electron accelerators, science is able to study the details of the atomic structure and build models of the atom as it is displayed here.

Title: What is the shape of the atomic nucleus; what is its structure?
Experiment: Scientists at the Bureau of Standards at Stanford University have succeeded in finding the shape and structure of atomic nuclei by scattering X-rays and electron particles.

Title: What are the basic constituents of the nucleus?
Experiment: Scientists at Brookhaven National Laboratory have seen strange particles in the atom. Their results contributed to the modern picture of the atom seen in this display.

Title: How can we create diamonds?
Experiment: The right combination of shape and temperature, pressure and carbon molecules produce synthetic diamonds. The process is explained here.

Group 6-Molecules as the basis of life

Title: How are genes passed on?
Experiment: By feeding a plant radioactive thymidine and tracing the radioactivity in its cells, science was able to determine how the chromosomes that contain genes are formed, when the cells divide and what happens to them during the growth process.

Title: Can genes be synthesised?
Experiment: Scientists in a laboratory have created a synthetic DNA (deoxyribonucleic acid) that is clearly similar to natural DNA.

Title: How do viruses infect?
Experiment: The outer wall of the virus consists of a protein. It serves as a binding medium and may contain substances that trigger the virus to enter the cell. The inner core of the virus usually consists of DNA and controls the production of several new identical virus particles inside the cell. The process is explained on the film. This section consists of films, models and presentations that explain and illustrate what science knows about the cell, the basic unit of life - what it is, how it works, when it dies.

The biologist can look at one particular cell and learn about all cells. The more he learns, the closer he gets to explaining the secret of life.

Adjacent to the cell exhibit in the centre of the area is a model of a modern laboratory in which demonstration experiments in electrophysiology, histology, microbiology and biochemistry are conducted.