Government of the Philippines - Expo Seattle 1962 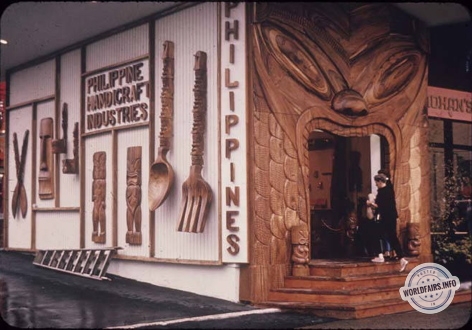 At the northern end of the International Zone, the Philippine Pavilion presents a comprehensive portrait of a people building a nation. The Philippine Government Pavilion at the Seattle World's Fair is a joint project of the Department of Trade and Industry and the Philippine business community. The Philippine Congress allocated 500,000 pesos (about $250,000) for the project. The private sector contributed an equal amount to ensure Philippine participation in the exhibition.

The wall facing the entrance to the pavilion is covered with ka-Magong, a deeply lustrous Philippine ebony. Next to it is a white marble information desk staffed by English-speaking representatives of the islands. On the side of the pavilion, an ornamental pool reflects the island character of the country. Outside is a fountain using giant Philippine shells. It was designed by a young award-winning sculptor in Manila, N. Veloso Abueva.

The exhibition, above the entrance to the two-storey pavilion, has been divided into four main sections:

Land shows the geographical location of the Philippines and its relationship with its Asian neighbours.

People shows who Filipinos are, their racial origins, what they look like, their dress and language, and their historical relationship with other people of the world.

Trade and Industry occupies the mezzanine. The exhibits are mainly products of Philippine exports, industries and the country's abundant natural resources, in collaboration with the potential for foreign investment.

Life and culture are presented in an exhibition of selected pieces of Philippine art.

During Philippine Week, July 9-15, the rich and colourful traditions of the Philippines will be showcased in performances by the Bayanihan Dance Troupe, the Opera House, concerts by the Philippines Army Band, a Philippine Fiesta, a fashion show on the evolution of Filipino costume, colourful Filipino jeepneys, Filipino films and exhibits by former Filipino sportsmen.