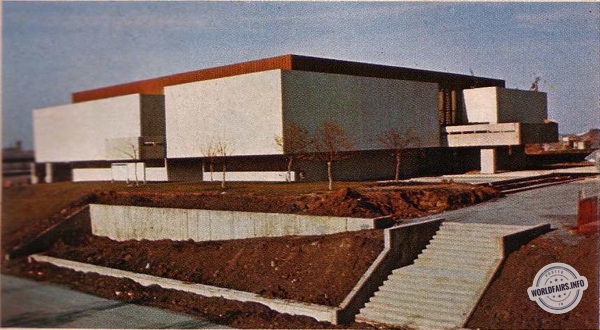 Since the fine arts are perhaps the most perfect expression of the human spirit, man's creative faculties were to be a major development of the theme of Man and His World at Expo 67. Is not artistic creation the sign of great civilisations?
By illustrating man's creative genius in four manifestations, it was intended to show the talent of artists in painting, sculpture, photography and drawing. The exhibitions were designed to make it easy for the public to grasp the meaning of the four disciplines in question and the influence of the peoples who have found their means of expression in art.
The International Exhibition of Art, the International Exhibition of Artistic Photography and the Exhibition of Industrial Aesthetics are located in the Cité du Havre. The International Exhibition of Contemporary Sculpture is located on Île Sainte-Hélène, near the metro station.
The Cité du Havre is served by the Expo-Express, with stations at Place d'Accueil and Habitat 67. The main entrance to the World Fair is in this area. The Balade also serves the Cité du Havre.

In a permanent construction in the Cité du Havre, 200 works of art by painters, sculptors, engravers, draughtsmen and ceramists make up an exceptional exhibition to which fifty museums in thirty countries have contributed. The aim of the exhibition is not to present the history of art in images, but rather to demonstrate the universal nature of art through works of art executed over the centuries. The collection represents all civilizations, artistic periods and schools. The visitor can learn about prehistoric Siberian art and the birth of Chinese civilisation, the Orient and primitive art, the pre-Columbian era, African art and the beginnings of Christianity, and admire a large number of works produced from the Renaissance to the present day.
In the spirit of the general theme of Man and His World, we have chosen works that illustrate the themes of: Man, Man, work and play, Man and love, Man and nature, Man and the city, Man and his conflicts, Man and his ideal, Man the visionary, and finally Man and the infinite.
France contributed 34 works of art to this exhibition, 12 of which came from the Louvre. The museums of the United States provided 45 works of art. The Soviet Union lent 12 masterpieces from the Hermitage Museum in Leningrad. Italian, German and British museums sent works by Renaissance masters, and Dutch museums are represented by masterpieces of the Flemish school. Among the artists whose works are included in this exhibition, the public will recognise Rembrandt, Tintoretto, Titian, Velasquez, Gainsborough, Cézanne, Rodin, Rouault, Picasso, Matisse and Van Gogh. A catalogue of all the works, some of which are reproduced in colour, is available.

Don't look here for the usual exhibition formula, let alone the family album. In this exhibition highlighting several aspects of his creative genius, the man, without pretence or complacency, has taken the camera as a witness to what he is.
Some five hundred carefully selected photographs represent perhaps the best work of photographers from around the world.
In keeping with the spirit of the Terre des Hommes theme, the international art photography exhibition shows modern man energetically living his life. His relationships with his fellow human beings, his difficulties and successes, misery, even cruelty - nothing, it seems, has escaped the prying, cold or sympathetic eye of the photographers.

The pavilion of Industrial Aesthetics is next to the Museum of Fine Arts, in the Cité du Havre. It contains the projects of students from eighteen schools renowned throughout the world for the quality of their teaching. This exhibition is not a competition, it is a realistic response to real human needs. The countries represented in this exhibition are Austria, France, Denmark, Finland, Sweden, Holland, Poland, Japan, Great Britain, USA, Germany and Canada.
The students' projects are ways of looking at certain social and national problems. The ideas are interesting and the humour is not alien.
A second event highlights the importance of industrial aesthetics in the 20th century. This is a film that can be seen at the DuPont Auditorium in Canada. This colour production explains industrial design and its role in the modern world.

Remarkable for the talent or genius of some of the sculptors, this exhibition is also remarkable for the balance of the representation adapted to the geographical distribution. The works were chosen for their plastic qualities as well as for their outdoor presentation. They are located in the park on Île Sainte-Hélène, near the Roseraie.

The exhibition of contemporary sculpture
The exhibition of contemporary sculpture, a seductive image of one of the most dynamic art forms of our time, brings together some twenty illustrious names, those of Rodin, Gonzalez, Lehm-bruck, Brancusi, Richier and Giacometti, and some thirty artists still living and no less famous, from Calder, Lardera and Moore to Heiliger, Chillida and Teshigahara. The Soviet Union, Czechoslovakia, Japan and Argentina are also represented.
Art lovers, specialists and laymen alike, who wish to keep a souvenir of their visit to the sculpture exhibition can obtain the bilingual illustrated catalogue, which contains an introduction to contemporary sculpture and reproductions of the works on display.