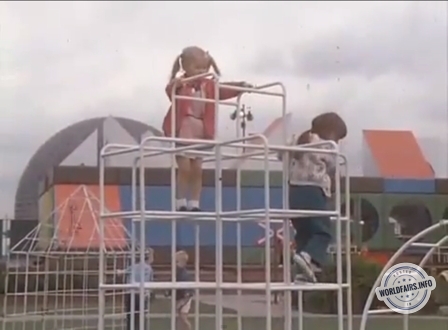 The Vienna Kindergarten is neither a park, nor a playground, nor a kindergarten, but a synthesis of all three in an open-air setting and with educational methods that are very close to the theories of Maria Montes sori, Anna Freud, Alfred Adler, Friedrich Froebel, Charlotte and Karl Buhler.

The whole place is on a child-friendly scale; they find what they like: trees they can climb, boots in the trees that serve as puppet theatres, rafts floating on large pools, sand dunes, and then rooms where they can take refuge in bad weather to do crafts, play with the educational toys of the day, and even cook and have lunch. It is a wonderful place where children are kings and masters. The pavilion itself looks like a colourful construction that a toddler has built according to his imagination.

Parents and Expo visitors can observe what is going on inside through special windows and hear the children without their knowledge, by means of headphones.

Thirty children are admitted at a time, including a pilot group of ten children who are admitted for a stay of two weeks to one month. The other two thirds of the group are children who only attend the Kindergarten occasionally and pay an entrance fee.