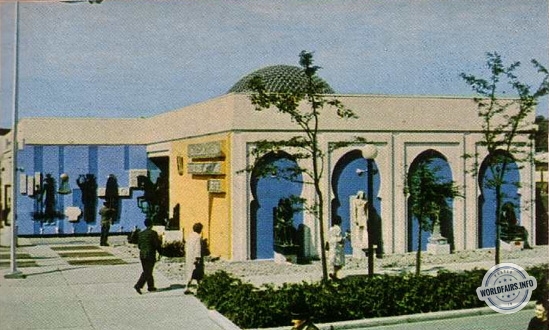 Kuwait is an Arab country whose dynamism has often been praised. It strives to reconcile technological progress with respect for Islamic traditions.

The pavilion offers a retrospective of the achievements of Kuwait, whose inhabitants were bold navigators who once transported the country's products - including coffee - in typical ships to markets in India.

Today, Kuwait has one of the best organised airlines in the world, and its influence is illustrated by means of graphics and paintings.

Pictorial elements and models enlighten the visitor on the development of the oil industry - Kuwait's primary industry and the main source of its wealth - the chemical, electrical, wood and marble industries. A place is reserved for jewellery.

The social welfare programme developed by the State, which has decreed absolute free education and medical care, is also highlighted by means of appropriate exhibits. Kuwaiti citizens are offered the possibility of owning their own home, with the option of paying for it in instalments over a period of 30 years.

Finally, a special section is devoted to the future of the Kuwaiti people and the projects that are to be undertaken, including the construction of highways and an underground metro system.