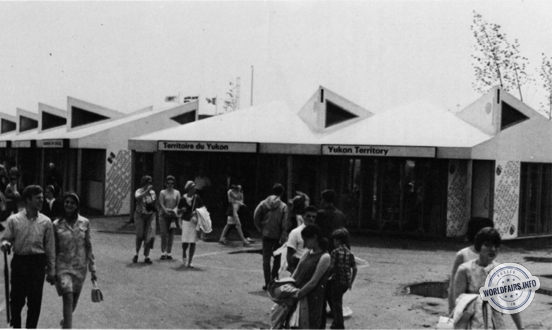 The Yukon pavilion, a gold rush country at the end of the last century, is the smallest of the Expo, but it enjoys all the privileges of the Canadian provinces.

By the time the Yukon administrators decided to participate in the World's Fair - February 1967 - space was scarce and they had to make do with a modest building at the end of a row of shops.

The display includes objects of historical and even prehistoric interest. Immediately noteworthy are the tooth of a mammoth that died thousands of years ago, a black otter trap, an authentic 1903 photo-model of Dawson City, and the only photograph of founder Robert Campbell, taken at Fort Selkirk in 1849. Among the exhibits is a gold nugget and jewellery. Other treasures include the huge head of the largest moose ever shot, bighorn sheep heads, deer antlers, stuffed trout and pike.

Handmade mukluks (moccasins) and other leather goods are on display. In a willow trunk, a sculptor has evoked the pristine nature that is the pride of this region. The visitor has the opportunity to read a few lines by the Klondike poet laureate Robert Service.