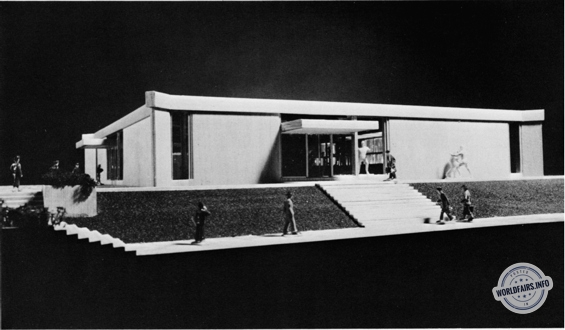 The Canadian Olympic Association presents an exhibition on the theme of "Man at Play". The main objects offered to the visitors' admiration come from the Olympic Academy (Greece), and the International Olympic Museum in Lausanne. Most of the committees from 126 countries are collaborating.

A courtyard with a glass ceiling is reminiscent of the "study gardens" of the ancient Greeks; a monumental interpretation of the Olympic torch is among the most captivating displays.

The Olympic House is a building constructed entirely of pre-cast concrete and left in its natural state inside and out. The architects were able to achieve a mid-level floor plan of 8,500 square feet on the ground and mezzanine floors and 2,125 square feet under the mezzanine floor for the pavilion administration. Approximately 20 per cent of the area is devoted to exhibition elements and circulation.

The statue of Finnish Paavo Nurmi - three-time Olympic winner - welcomes visitors. Inside the pavilion there are other sculptures on loan from the USA, Greece, Japan, Switzerland and the USSR. A Montrealer himself lent the statue of two Roman gladiators. Flags representing the 26 Olympic sports fly over the house.

The Olympic House is what the Olympic Association of Canada has long dreamed of establishing: a centre where the true Olympic spirit shines. The pavilion's managers have inscribed the following words from the renovator of the Olympic Games at the entrance to the pavilion: "The important thing in life is not to win, but to fight well".

Olympic House is sponsored by the Hudson's Bay Company, the Foundation Company Limited and the City of Montreal.