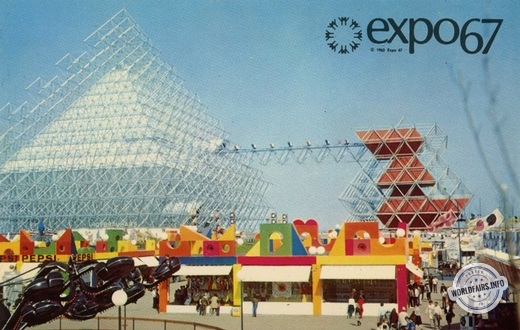 The Gyrotron consisted of two lattice structures, a 217 foot high pyramid and the smaller Volcano, both connected by a walkway.

Passengers boarded four abreast in small gondolas that spiralled to the top of the pyramid, where they were immersed in meteorites and satellites.

There they heard the characteristic sounds of space travel, including the countdown to the launch of a rocket and the beeping of satellites. Three-dimensional spaceships moved around them, while stars and galaxies were projected onto the black walls.

Passengers then took in a panoramic view of Expo as their gondola crossed the bridge connecting the pyramid to the second structure - a "volcano" - from which smoke was billowing. The "flames" shot out of the walls made of moving fibreglass curtains. The gondola then plunged 70 feet into the "boiling lava", with a concert of hissing sounds, escaping fumes, sudden explosions and a "rain" of rocks.

Finally, the passengers were "swallowed" at the bottom of the volcano by a huge monster straddling the track. Some three thousand passengers could travel at a speed of 200 feet per minute. The Gyrotron adventure lasted a total of six minutes.


Designed by Kenny Sean, this $300,000,000 attraction was the most spectacular ride at the exhibition.