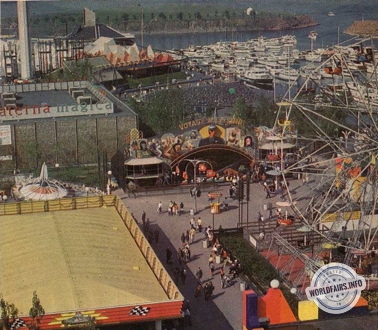 The Laterna Magika was created in 1958 by Alfred Radock for the Brussels World Fair. It won the gold medal. It was later installed in a theatre in Prague, where it quickly became one of the city's main attractions.

The Laterna Magika travelled all over the world, presenting the same programme as in Brussels: Moscow, Leningrad, London Vienna, Zurich, New York, Damascus, Cairo, Brussels again and many other European cities.

Two teams of technicians and three groups of artists presented twelve shows a day; all collaborators were Czech.

Those in the business have called it cineorama, polyvalent total theatre, Laterna Magika, poly-screen cinema. It is an attempt to go beyond classical cinema and to give expression to the true, hyper-technological, universal and complex art of our time.

The Czechoslovak Laterna Magika is a new artistic concept. It is a performance that combines theatre and cinema and encompasses music, visual arts, architecture, literature and ballet. Actors, dancers and musicians appear on stage and, simultaneously, on screen; other essential factors of the performance are text, songs, music, light and colour, dance and visual arts.

Film is used in a number of ways; it represents the stage, it situates the action within the subject, it is projected simultaneously onto a number of screens which may appear and disappear as the action requires. The film highlights the actor's activity on the stage and sets the pace of the action.

One of the most notable innovations is that of polyprojection. Not only do the dimensions of the screen constantly vary according to the needs of the plot, but the plot also benefits from the simultaneous projection of different subjects on screens, or portions of screens, placed here and there.

The theatre could accommodate 600 spectators.