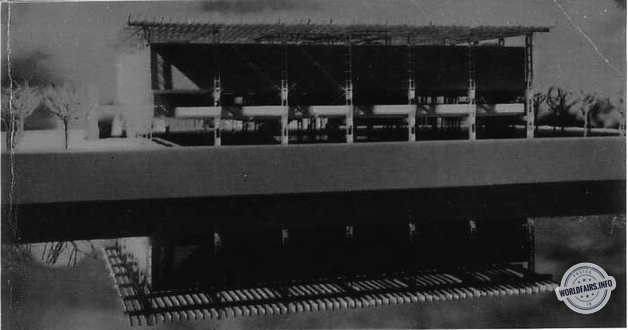 The joint pavilion of the five Scandinavian countries, Denmark, Finland, Iceland, Norway and Sweden, has Human Solidarity as its theme. Five architects - one from each country - prepared the plans. They used plastics from Denmark, laminated wood beams from Finland, textiles from Iceland, slate from Norway, steel from Sweden.

The two floors of the pavilion stand on pillars in the middle of a sculpture park. Mobile ramps allow visitors to move to the first floor, where the large Midnight Sun restaurant with its imposing polished brass "smorgasbord" table, a cafeteria and a bar/lounge offer gastronomic specialities from the five countries.

On the upper floor are the exhibition rooms. Each of the
Each of the participants has its own area in which to showcase its characteristics. However, the elements are presented in such a way as to illustrate the fundamental unity of the cultures. The importance of international cooperation is particularly emphasised.

DENMARK has chosen as its theme: "Man as the raw material of a developed country", a theme which it translates by emphasising the high competence of the Danes in all fields of economic and cultural activity.

To help the visitor better understand the development of the main idea, Professor Erik Herlow of the Royal Academy of Fine Arts has created a relaxing setting.

Compositions made from raw and semi-finished products illustrate the talent that is essential for human progress, especially in agriculture, industry, arts, crafts and science.

In the sculpture park outside the pavilion, there is a work in three sections by the great sculptor Robert Jacobsen: "Loki and the Brandons of Discord".

FINLAND uses the most daring artistic forms to present its industrial and cultural achievements and to show that it is one of the fifteen most industrialised countries in the world.

In the exhibition room on the upper floor of the pavilion, five giant panels are creations by five of Finland's leading artists: Birger Kaipiainen, Laila Pullinen, Timo Sarpaneva, Ms Uhra Simberg-Ehrstrom and Tapio Wirkkala. Photos and samples of finished products surround the panels. Three Finnish artists are exhibiting works in the sculpture park.

The theme of the presentation is "Creative Finland".

ICELAND presents its geographical aspect and, in particular, its volcanoes, geysers and the use of natural hot springs in urban planning, especially in Reykjavik, the capital. Using materials provided by a physicist, a geologist and an engineer, architect Skarphedin Johannsen has created a series of drawings, sculptures, photographs and ceramics modelled in lava, which illustrate the history of Iceland, a geologist's paradise.

The main attraction of the event is a film shown in the DuPont auditorium. It shows how the volcanic island of Surtsey rose from the waters of the Atlantic. Columns of hissing steam and spurts of black ash shoot into the sky. Sometimes accompanied by hailstones and lightning, the lava bubbles up, rises from the ocean and finally forms a new island.

The presentation introduces the history of the Icelandic people, their way of life and the progress of their technology. Drawings illustrate the arrival of the Vikings and Leif Erikson's last voyages to Greenland.

Photographs of underground formations and above-ground developments, such as a municipal water pipe and a greenhouse for growing vegetables, flowers and tropical fruits, illustrate the use of the hot springs.

NORWAY, by choosing "Man and Water" as its theme, underlines its historical intimacy with this element. Architect Torgensen has played with metal to express the sub-themes of vertical and horizontal water.

Sculpted in steel, a cataract seems to flow into a pond also made of metal. Vertical water represents the energy that powers Norway's industries, mainly the metal and chemical industries. Horizontal water is the sea, exploration, commercial fishing and the Norwegian merchant marine, the third or fourth largest in the world.

Norway makes a valuable contribution to the thematic pavilions, including "Man and the Polar Regions", "Man and Life" and "Man's Creative Genius".

SWEDEN develops the theme "For a more humane way of life" through the extensive use of short film strips projected in a half-open room. Seven topics from the Universal Declaration of Human Rights voted by the UN General Assembly are covered: health, education, employment, housing, social security, recreation and culture, and civil liberty. Sweden has achieved a very high standard in all these areas and is constantly addressing problems of social significance. Successes and failures are discussed without prejudice in the film by Yngve Gamlin and Karsten Wendel.

Sweden's participation in Expo 67 included three thematic pavilions: "Man at Work", "Man and Health" - through the loan of a proton knife - and "Man and the Polar Regions", where films on the life of the Lapp people were shown.