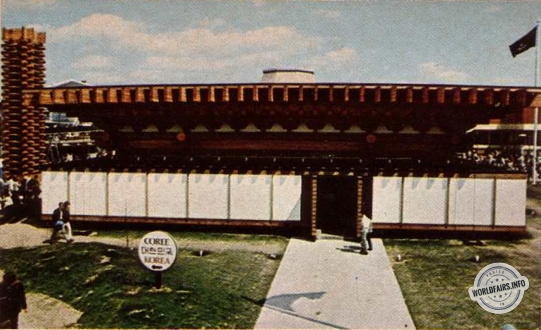 The Korean pavilion, hand-built in the style of a traditional manor house, is rectangular in shape. It consists of eight twin columns supporting a flat roof, the only concession to modernism, to better fit the overall architecture of Expo 67.

The exterior cladding and framing are of wood, and in front of the pavilion entrance, a 40-foot high column of logs stacked and alternating in both directions symbolizes the promise of the future and illustrates the pavilion's theme: "the hand of man".

This corner of the Far East in America reveals to the visitor not only the cultural heritage of a country whose history goes back more than four thousand years, but also its rise in international trade. Among the exhibits are Korean national treasures, such as a Buddha replica of a 5th century bronze in the Seoul National Museum, a scale reproduction of the first battleship in history, invented by Admiral Yi Sun Shin in 1595, and ancient printing methods.

Fabrics, woodcuts, trays, ancient and modern masks, and ceramics showcase the traditions of various regions of the country. Modern products also have their place. Bicycles, sewing machines, typewriters, synthetics, etc. can be seen.