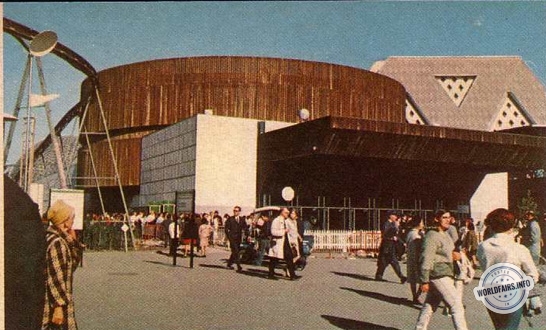 The Telephone Association of Canada pavilion is a very simple building. It consists of an entrance hall, a cinema and an exhibition hall.

The main attraction is undoubtedly "Canada 67", a film presented using a new cinematographic process developed by Walt Disney Productions in Circle-Vision 360°. This technique is based on the use of nine projectors that reflect the image onto a circular screen, 22 feet high, which completely surrounds the spectators. Circle-Vision 360° requires nine cameras to capture the image at a 40 degree angle. Commentary and atmospheric music are delivered to the auditorium through fifteen stereophonic speakers, nine of which are hidden behind the screen and six on the ceiling. The audience really feels like they are right in the middle of the action.

The film shows various aspects of Canada and Canadian life. You can admire the beautiful landscapes of the Rockies, the Celtic dances of Cape Breton, the Royal Canadian Mounted Police cavalry, the Calgary stampede, the Quebec carnival, a National Hockey League game, etc.

On leaving the cinema, the visitor goes to the exhibition hall where all kinds of amusements are provided. First, on the left, the enchanted forest. In the middle of a forest with gigantic trees and flowers, children perched on huge mushrooms communicate with their favourite cartoon character using a Digitone telephone.

From the world of enchantment, we move on to the world of games, in a section entitled "Telephone Magic". Visitors can test their skills against those of an electronic calculator.

Further on, there is a real panorama of the telephone industry, with the most recent innovations. Thanks to electronic switching, three or more people can talk together on the same telephone line. To illustrate the possibilities of electronic communication and the Digitone keypad, an animated demonstration with houses, department stores and warehouses was created to show how the housewife of the future will be able to do her shopping without leaving the comfort of her home. With the help of a videophone, she will be able to make her choice from home and order directly. Computers will handle delivery and billing. Five booths have been set up where visitors can try out the videophone devices.

In the centre of the pavilion, displays have been set up to showcase telephony-related services such as artificial larynx, power control and emergency telephones.