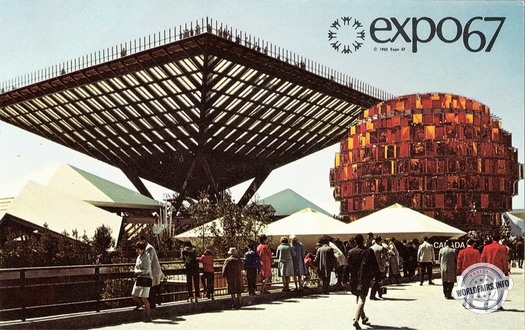 The central and main feature of the Canadian pavilion is called Katimavik, an Eskimo word meaning "meeting place".

It is an inverted pyramid, 108 and a half feet high, whose four sides, inclined at 30 degrees to the interior surface, support exhibits symbolizing the conquests of universal man over time, space, nature and himself.

At its summit, the Katimavik is surrounded by a 768-foot walkway, which can be accessed by means of stairs built into three of the four inner corners of the pyramid. An inclined lift occupies the fourth corner.

Beneath the base of Katimavik, Canada's political and socio-economic growth is dramatically illustrated on five screens in a rotating cinema. Without having to move, some 2,280 people per hour are transported from the first to the fifth theatre, through 400 years of history.

From a distance, the Canadian Tree looks like a maple tree that nature has adorned in its most beautiful autumn colour. The stylized tree is made of laminated wood and is as tall as a six-story building. Two spiral ramps cut into platforms allow up to 300 people at a time to walk through its foliage. It is made up of some 1,500 three-by-five foot nylon panels, 500 of which are photographs of Canadians in their various occupations.

As you can see, all the displays in the Canada pavilion are related to the general theme of Expo, Man and His World, with the emphasis sometimes on the universal man, sometimes on the Canadian people in the face of obstacles, conflicts, victories, or the environment and setting in which they live.

The fourteen pyramidal roofs surrounding the base of the Katimavik house three large sectors: Resources and Energy, Transportation and Communications, and New Times.

The Canada pavilion has not forgotten the youngest visitors to Expo 67; an entire sector of the pavilion is devoted to children aged three to eleven.

Further on, the Foyer of the Arts, which includes a 500-seat theatre, two libraries and two art galleries, presents the best Canadian artists in classical and popular song, instrumental music and dance, as well as the witty magazine Katimavik. In addition, the Art Foyer features some 50 paintings by Canadian artists, watercolours, graphics, photographs by Karsh, crafts and some works by Canadian sculptors.

The two restaurants in the Canada Pavilion, La Toundra and The Buffet, offer visitors an unusual visual and culinary experience. There are also two snack bars on the terraces.

On a pond at the edge of the pavilion's gardens, not far from the lagoon where the fearsome two-headed steel monster Uki plays, a water show illustrates the fierce battle between man and ice on the country's rivers and coastal waters every winter. Every hour, a miniature icebreaker of about seven feet comes to the rescue of a fifteen-foot cargo ship apparently trapped in the enemy element. A service vessel then picks up a defective buoy and replaces it with a good one.