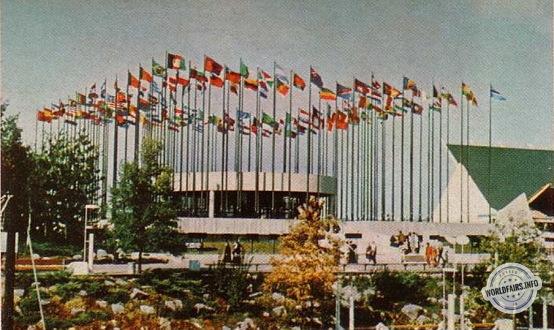 At the entrance to the pavilion stands "The Tree of Life", a sculpture symbolising the union and equality of all people. The European artist Peppi Rifesser has boldly carved the characteristic features of the great human races into it.

The building is circular and made of concrete, steel and glass. The exhibition hall contains an information and documentation centre on the UN's many global commitments and its various specialised agencies. Large photographs of men and women working in the technical and professional assistance programme in developing countries hang from the ceiling. In the centre of the pavilion, a facsimile of the UN Charter and other historic documents are displayed.

A post office offers special stamps issued for the Expo. The issuance of stamps in Canada by a body other than the federal government is unprecedented. In the same area, a very rich collection of stamps issued by the UN since 1951 can be admired.

Under the pavilion, there is a cinema and a restaurant. In the cinema, films of exceptional quality are shown, such as "Vivre", winner of several festivals and an Oscar. "Japan my garden", etc. The cinema is also the scene of special events. In June, the study sessions of the twelfth colloquium of the Canadian UNICEF Committee were held. In July, Refugee Week was held, and in August, International Labour Organization Week. Finally, in September, UN Secretary General U Thant began his official visit to Expo at the UN pavilion.

Facing the St. Lawrence River, the All Nations Restaurant is decorated with large frescoes and bronze and silver utensils.