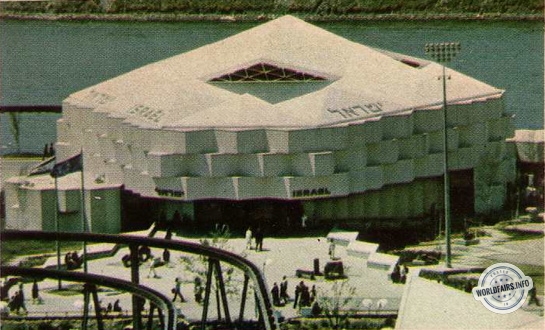 The Israel Pavilion is a testament to the courage and dynamism of a people who, after two thousand years of adversity, succeeded in rebuilding a homeland in the land of their ancestors.

The pavilion is surrounded by a garden reminiscent of certain biblical landscapes. The walls are windowless and are made up of a series of cleverly arranged cubes. The geometrically shaped roof is designed to let light into the upper part of the building.

The interior of the building is divided into several rooms that illustrate the history of the Jewish people from the time of the prophets to the present day. In addition, there is a restaurant and a 350-seat auditorium where films and performances are shown.

At the entrance to the pavilion, an archaeological exhibition, which includes one of the Dead Sea Scrolls, evokes the land that was the cradle of Jewish civilisation. A monumental fresco describes the exile and the nostalgia for Zion. This is followed by a room showing the settlement efforts of the first pioneers at the beginning of the present century.

After a reminder, in a darkened room, of the extermination of the Jews under the Nazi regime, a brightly lit room evokes the second birth of Israel. The rest of the pavilion illustrates the building of the new state, the prodigious rise of its people and its astonishing achievements: the conquest of the desert, the renaissance of the Hebrew language, the rapid development of agriculture, transport and industry, etc. . It also highlights the ideals that animate the people of Israel and the dynamism of its youth.

A final room is devoted to the country's beauty, its historical riches, its arts and crafts. Several Israeli products are displayed, including books, stamps and records.