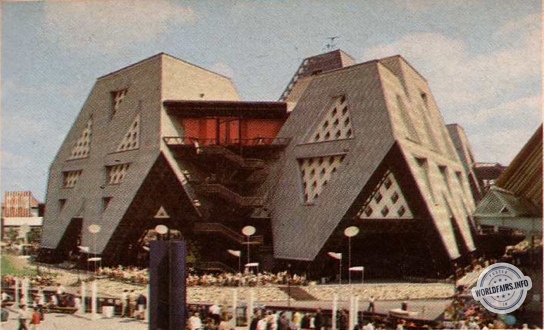 The "Man at Work" pavilion is located on the Ile Notre-Dame, near the Express station.

A show, the Citérama, takes stock of urbanisation.

It presents a synthesis of the contemporary city, while confronting two great eras: the agricultural civilization and the technological civilization.

In the City of Solitudes, the problem of segregation in the world is studied by means of mannequins and soundtracks.

In the Daily City, a puppet and collage show describes the effects of technology on traditional notions of work and leisure.

To illustrate the Cities on the Move, six countries have been chosen where the technological revolution has taken place under different regimes.

Huge paintings illustrate daily life in the countries "on the move" before the age of industrialisation.