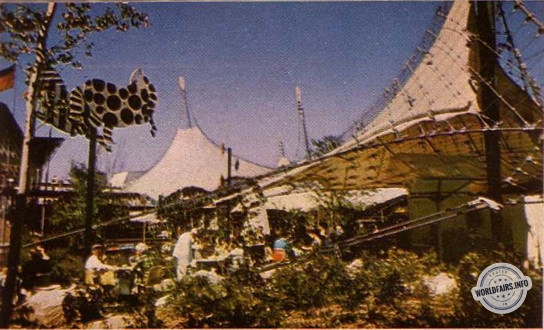 The pavilion of the Federal Republic of Germany marks an innovation in 20th century architectural concepts. Its tent-like roof consists of a steel mesh covering a film of translucent plastic. It is suspended from eight giant masts, the highest of which rises 120 feet into the air. The glass screens surrounding the structure eliminate wind and drafts. The roof was shipped from Germany, rolled up like a carpet, and erected on the shores of Lake Regatta in less than six weeks.

The pavilion presents its theme "The Federal Republic, the country and its people" in four main areas: art, science, economy and society. On a tour of the pavilion, you can see, among other things, the table on which the physicist Otto Hahn discovered the fissile properties of uranium in 1938, the German-built bathyscaphe used by Auguste Picard to explore the oceans, some of the cameras used by American astronauts, the first map on which the word "America" appeared, and the old Gutenberg press. In the arts, music plays a major role.

Films and performances are shown in an auditorium built, like the pavilion itself, in an unusual way. There are also three restaurants in the pavilion: a café, a Berlin brasserie and a first-class restaurant.