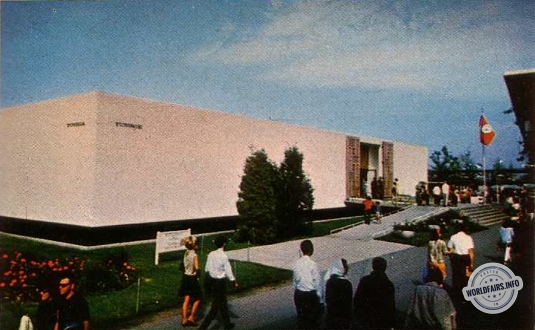 The architecture of the Tunisian pavilion is inspired by the admirable style of this country. It is white, its base is covered with Nabeul ceramics and rests on a basin.

All the rooms of the pavilion are arranged around a colonnaded courtyard, reminiscent of the beylical palaces. The heart of this patio, which is at the same time the main exhibition element of the pavilion, is a Roman mosaic which, in the second century, was used as a pavement in a Roman dwelling discovered at La Chebba. It is four metres long and three metres wide. It is dedicated to Orpheus. The decorative motif consists of oval, round and star-shaped medallions framing various figures: on the right, around Orpheus sitting and playing the lyre, various quadrupeds listen to the divine singer; on the left, fish and a bird surround Orion or Tars riding a dolphin. This part of the mosaic dates from the second century; the emblem added at a later date (probably in the third century) shows a nautical landscape.

The visitor can discover the many faces of the Tunisian revival, feel the bustling atmosphere of the souks of the Medina of Tunis and see craftsmen at work. He can taste Tunisian cuisine and enjoy a black coffee in a jasmine-scented atmosphere while listening to the enchanting rhythm of "malouf". One of the walls of the restaurant is decorated with a huge fresco by a Tunisian artist, Zoubeir Turki, which illustrates the theme of the Expo, "Terre des Hommes".