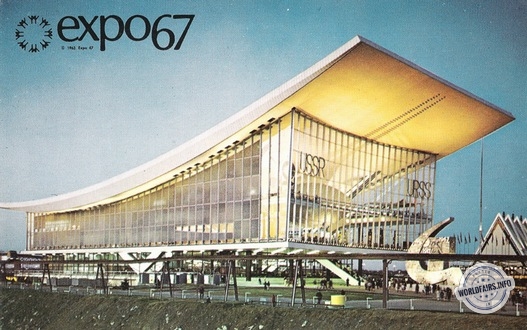 Hundreds of exhibits from the fifteen republics of the Soviet Union are grouped together in a streamlined pavilion which, together with that of the United States of America, dominates the grounds of the 1967 World's Fair in Montreal.

The Soviet pavilion tells the story of how each of the republics emerged from the shadows and rose to a remarkable cultural, social and technical level at an unsuspected pace.
Seeing the earth from the moon... Tasting fish in a crust or chachlyks ... Look at the giant model of the future city under the roof in Siberia, where the largest hydroelectric power station in the world, the one in Krasnoyarsk, is in operation... Admire the 2,000 handicrafts ranging from simple wooden dolls to sable coats... To stop in front of hundreds of screens to see a people living, or dancing, singing and evolving artists with an incredible technique ... This is what the pavilion of the twenty-one republics of the Soviet Union has to offer, under the theme "Everything in the name of man and for the good of man".

The section devoted to the peaceful use of nuclear energy is very considerable. It was important to present its use in medicine, industry and agriculture.

Art and culture are the subject of a particularly rich section and the emphasis is on the aesthetic education of children.

The most exciting section is undoubtedly the one on the conquest of space. In the "Moon Room", visitors can see a panorama of the moon. A planetarium has been set up where 70 visitors can experience the sensation of interplanetary flight in armchairs.

The Soviet Union contributed to the presentations of the following thematic pavilions: "Man questions the universe", "Man at work", "Man's creative genius", and "Man and health".