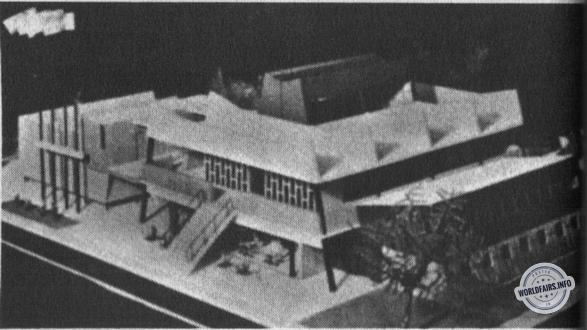 The Argentine pavilion was a modern structure with a total area of 1100 square metres and comprising three floors and a basement. It was vividly painted in primary blue, red and yellow, providing a striking contrast to the white tiled floor. Architect Roberto Quiros designed the pavilion to express Argentina's youthful image, his Japanese co-architect was Miss Toshiko Ezaki.

The pavilion housed a 184-seat restaurant on its first floor. And it served traditional Argentine beef dishes and a variety of wines. On its central stage, Argentine artists presented a show so that you could dine in the atmosphere of the land of tango.

The main exhibition hall was on the second floor of the pavilion. Under the theme "Peace, Freedom and Happiness", cultural, art, agricultural, dairy and light industry items testified to the highest quality of life in South America. Included were items used by gauchos to raise cattle in the pampas for a long time.

Outside the pavilion was a cafeteria with nine crimson fireplaces. Here you could enjoy charcoal-baked food and other delicious dishes in a warm atmosphere. Films in an adjoining theatre introduced the beautiful nature and life of Argentina.

Argentina is a large dairy and agricultural country like Australia. It ranked first in the world for meat, second for wool and corn exports and third for wheat exports.

With its large crop and livestock potential, Argentina was ready as a producer of food for the peoples of the world. In addition, it has developed a large-scale industry for food, tanning and weaving and has reached an international level in electronic technology. Yes, agriculture and industry were the pillars through which Argentina played its role.