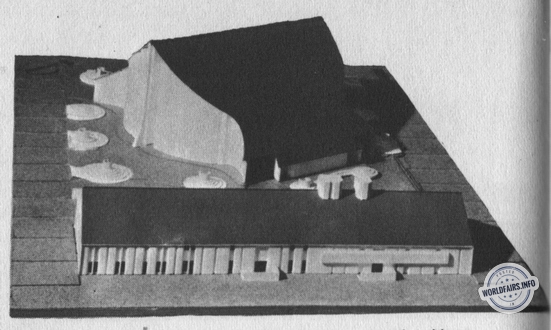 The Belgian pavilion, under the theme "You and Us", gave millions of visitors the image of a true, simple and human Belgium; the image of people striving for a better human condition in brotherhood and peace.

A harmonious blend of traditional Belgian and Japanese architectural features, the Belgian pavilion with its curved white walls and red clay tiles was set in a garden created to represent the smallness and total use of the national territory.

From this configuration of intensive and diversified agriculture, the visitor entered the "Present" section. Here, Belgians at work, surrounded by their institutions, were illustrated through an audio-visual environment that presented the main national industries.

In the 'Past' section, a succession of paintings, tapestries, jewellery and other works of ancient art, described the power and dynamism with which the Belgians have fought the ages for the progress of humanity.

The third section, "The Future", showed the complexity and speed of today's technological evolution but underlined the Belgian vision that humanism will keep control over the effects of mechanisation.

In the main part of the exhibition, visitors could enjoy themselves in a small luxurious restaurant and a large, moderately priced cafeteria where they could taste typical Belgian dishes.