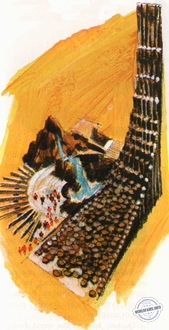 British Columbia, Canada's westernmost province, has long-standing historical ties with Japan. Vancouver, Canada's most important port on the Pacific coast, opened its doors to trade with Japan long ago.

The British Columbia pavilion represents the forests, lakes and mountains of British Columbia. Rising to the sky, 300 Douglas fir trees symbolize the vast geography of the many rich mountain forests that span the province. The trees, some over 50 metres tall, make the pavilion the tallest wooden structure in the world. Located inside is an unusual cinema, with a special screen three metres wide and 15 metres high. Here, a 10-minute film depicts life in British Columbia. On one side of the pavilion, there is a small mountain, symbolising the sources of the province's mineral wealth, and a park with miniature animal replicas in their natural environment. Two waterfalls flow into a lake surrounded by exhibition halls.

The entrance to the pavilion is adorned with metal spars in the shape of a fan to express the province's developing metal industry. The lobby contains a metal sculpture depicting the history of British Columbia.

A number of carved wooden doors supported by totem poles, all made by Indians in British Columbia, guide to the themed theatre within the newspaper structure. In other rooms "plastic sculpture" and ever-changing photographs show how the people of British Columbia live in harmony with their environment. After passing through the "Water World" gallery, where waterfalls fall into the lake, and the "Industry World" gallery, you enter a second special cinema room where 48 cinema projectors project pictures onto a dome of 96 screens surrounding the visitor, which then exit through the small park.