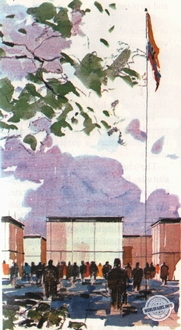 As its name suggests, Ecuador is a South American republic that straddles the equator.

Two north-south Andean foothills, dividing the country into three zones, each with different climates, the humid and warm lowlands on the Pacific coast, the temperate highlands between the foothills, and the tropical eastern lowlands bordering Peru.

One of Ecuador's main industries is the manufacture of Panama hats. They are made from Toquilla straw, an indigenous plant called palmata carludorica. The name is derived from the fact that they were originally exported to world markets through Panama.

An interesting and little known fact is that these hats are handwoven in the moonlight. The straw becomes coarse and hard when exposed to the sun. It also becomes dirty if woven near the lamp.

The mainstay of Ecuador's economy, however, is the banana sector. Apart from the export of large quantities of bananas there is coffee as well as cocoa.

Relations between Ecuador and Japan have become increasingly close in recent years, especially in the area of economic cooperation.

Ecuador wants to accelerate its economic development. For this reason, international collaboration is necessary to achieve the different objectives that have been projected.

Plans were being made and work had to be done. Japan had the opportunity to be one of the main markets for the planning and financing of these works, especially the infrastructure projects.