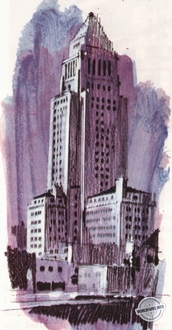 Los Angeles, the fastest growing city in the United States, is highly innovative, as well as highly industrialised. Ten million people live within 60 miles of City Hall, the centre of the world's largest government complex outside Washington, DC.
These 10 million people earn $36 billion a year and their income is growing by $2.5 billion annually. In addition, Los Angeles, with $46 billion in "Gross National Product", is exceeded by only nine countries in the world.

Greater Los Angeles is a hub for countless scientists, electronics, research, aerospace and oceanographic industries. Within its golden circle is the largest concentration of mathematicians, scientists, engineers and skilled technicians in the country. Its growth has been phenomenal, due to the fact that a hundred years ago the entire population of the city was only 1000 people. Now, almost an equal number arrive every day to live in Greater Los Angeles.

The city's strong industrial development began during the Second World War. Aviation and shipbuilding were the first boom, with oil refining, automotive and aerospace soon to follow. Today, it is a multi-million dollar business, with Los Angeles leading the nation in many fields. Among these, of course, is film and television, which make Hollywood the film capital of the world.

The city and its diverse industries use one of the world's largest man-made ports, the Port of Los Angeles, the "cargo capital of the west". Los Angeles is also served by 22 airlines, but it is essentially a vehicle city, with one car for every 2.2 people, a highly developed complex with five urbanised counties that boasts the world's largest motorway system with currently 1,144 miles, plus those under construction every day.