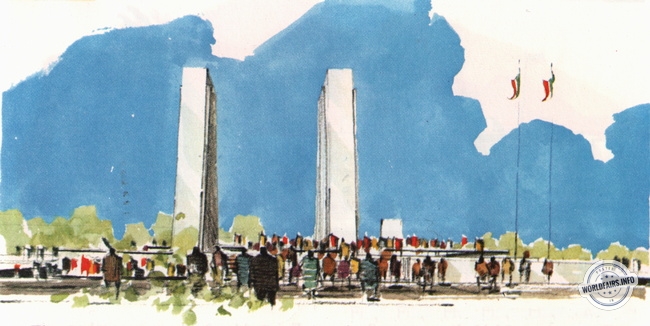 The Pavilion of Mexico was a citadel, a modern transposition of the spacious citadels of the ceremonial centres of Teotihuacan (City of the Gods). The overall architectural effect symbolised, with symmetrical dynamism, the pre-Columbian concept of dualism and the dynamic union of opposing elements.

The theme was based on the art of language, which has no borders and best expresses the creative genius and spirit of the Mexican people. The motto, "Mexicans, people of the sun, meeting Japan, country of the rising sun, and all the other nations of the world" was inspired by the deep desire rooted in the hearts of all Mexicans that there should be prosperity and social justice for all peoples on earth, manifesting the humanistic supremacy over the Machine, technology and science, so that they could be used to bring about an era of peace and progress for humanity.

To illustrate these concepts, Mexico had used in its pavilion pictorial sculptural symbols, films, masterpieces of art from all eras, crafts, music, dances and sections of the visual arts created especially for Expo'70.

From the main vestibule of the "Sunstone", the "Aztec Calendar", shone at the head of the remarkable collection of masterpieces of pre-Columbian art, baroque religious and new Spanish works of the 17th century, all national treasures. The many images of "Mexico through the centuries" were projected on a cinema screen with original kaleidoscopic effects.

In the pavilion's two outdoor stages, folkloric dances and concerts were presented daily by famous musicians, called "mariachis", filling the air with dynamic rhythms, full of vitality and gaiety.

Indeed, Mexico conveyed through the rich emotion of its art, harmony, as the main structure of the philosophy and concept of life of its people.