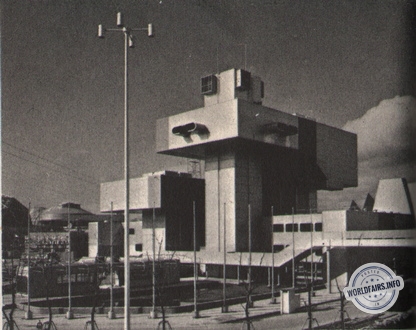 In the central hall of the pavilion, two large walls were dedicated to Surinam and the Netherlands Antilles. Slide shows depicted the openness of these two Caribbean countries to the rest of the world.

Progress through Openness, in fact, was the theme of the pavilion, in which the Netherlands was seen as an open country, both literally and spiritually. The Dutch people, at the junction of the world's traffic routes, saw contact with others as vital.

The Dutch pavilion, painted in blue, silver and orange, was a series of stacked cubes 30 metres high and supported by four towers. Access was via two sloping walkways under the building and led to an escalator that took you into the central hall; three wings here contained a restaurant, a theatre and a reception area.

The second floor was a service area. In the main structure, equipped with an escalator, there were three "cabins", the top floor offering a panoramic view of the Expo.

Throughout the pavilion, a new 'multi-screen' technique was used, showing several films simultaneously and giving the impression of living in the Netherlands.

In the theatre, documentaries were regularly shown and Dutch music was played daily. "The 'information units' at the back of the building were another important source of specific information, which you could operate yourself. There was also a bookshop, a tourist information centre and a stand where more detailed documentation could be obtained.