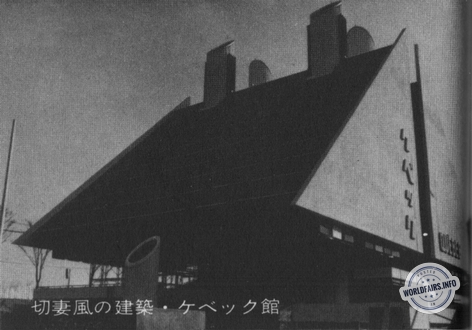 In the spirit of the theme "Progress and Harmony for Humanity", the Quebec pavilion presents in a dynamic way the evolution, culture and aspirations of the people of Quebec.

The visitor will become aware of the immensity of the Quebec territory and its unique position on the world map. Because Quebec's climate has a marked influence on its people, the four seasons of Quebec have been recreated for the visitor to give him or her a better understanding of the nature of the people who inhabit this great country.

Quebec is one of the richest territories in the world, and the visitor will be well acquainted with Quebec's vast forests, paper industry, seemingly inexhaustible mineral resources and its hydroelectric power plants.

Taking the stairs to the upper floor, the visitor is immersed in the Quebec Winter Carnival, a snow carnival that is unique in America and which vividly demonstrates the joie de vivre and exuberance of the people of Quebec.

An audio-visual montage illustrates the social life as well as the typical personal life of Quebecers.

In another section of the Quebec Pavilion, the daring pioneers living in the far north of Quebec are represented by puppets in the middle of an Eskimo village.

Walking towards the exit, one can admire tapestries produced by the most remarkable artists of the Province of Quebec, typical Quebec jewellery, paintings or sculptures.

Quebec City, which hosted the world during Expo'67 in Montreal, occupies 1,540,000 square kilometres (59,600 square miles) in the northeast corner of the North American continent. It is more than four times the size of Japan and represents 15% of Canada's land mass, making it the largest province. It has a population of about 6 million.