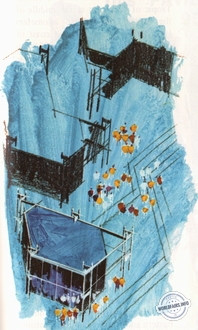 Uruguay is located in South America in the temperate zone. Its 18,700 square kilometres (72,930 square miles) are bounded by the River Plate and the Atlantic Ocean. The country is made up of a succession of small hills with rounded curves, the climate is mild and temperate.

Uruguay's nearly 300,000 inhabitants are of European origin, mainly of Spanish and Italian descent, and 1400,000 live in the capital Montevideo.

A highly civilised country, the Republic of Uruguay is one of the most advanced countries in the world in political and social systems. All inhabitants enjoy complete freedom and can rely on their talent, work and civic virtues. There are no castes or privileges. The language is Spanish. The state is secular and respects all beliefs. In this country, foreigners and natives are equal before the law: the former find the hospitality exquisite and the country generous.

Agriculture, livestock breeding (more than 30 million heads) and industrial enterprises have shown in recent years an increasing indication of rationalisation, specialisation and integration. The main exports are meat and its derivatives, wool, leather, textiles and marbles, the main imports: raw materials, machinery, fuel and vehicles. Tourism has been growing in recent years and is becoming the main industry. Every year, thousands of tourists enjoy the sunny beaches of the Atlantic. Among its most popular summer resorts, Punta del Este is known all over the world.