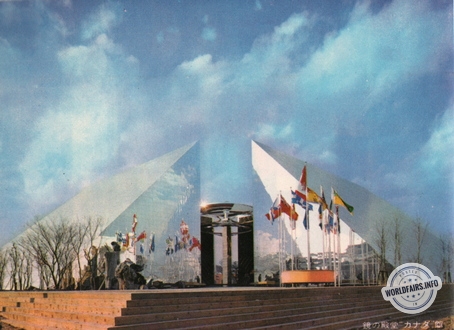 Discovery was the theme of the Canadian pavilion, an invitation to discover Canada but also an essential fact, that since its discovery Canadians have explored the vast expanses of their land and today carry that adventurous quality into industry, science and art.

Clad in mirror-like outer walls, the pavilion's exterior reflected the sky. But the illusion suggested the polar square, the mass of the mountains, the sky of the vast prairies or the sheen of the water, all aspects of the Canadian landscape.

In the courtyard the mood changed. A young country. "Large rainbow umbrellas swirled above the young Canadian singers, dancers and musicians who performed each day.

The exhibits below began with a series of theatres. Computer-controlled audio-visual displays presented the scope, size, and potential of the Canadian country, from Canada as a peaceful nation to its achievement as an urbanized country. On one wall, thousands of tiny light-emitting cells formed a cartoon of people adapting to their environment.

Finally, the exhibits traced, through products and objects, the origins and development of Canadians, from migrants from Asia, France or England, to recent arrivals from every corner of the world. In the face of the evidence of a sophisticated economy, the highlight of the presentation was the largest wall ever carved by the Eskimos.

As befitted the holder of Expo'67, Canada was the first nation to agree to participate in Osaka and the first to complete each phase of the planning. Canada was represented by the provinces of Quebec, British Columbia and Ontario, which had their own pavilions.