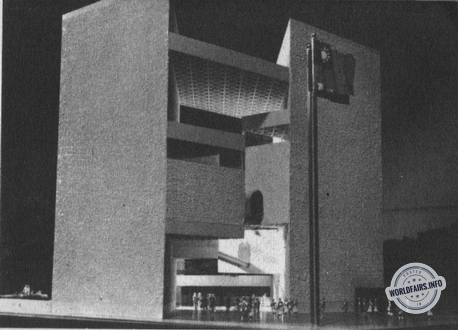 The theme of the Chinese pavilion was "China, Heritage and Progress". Architecturally, the pavilion expressed the complexity of traditional philosophy with simplicity. Two identical and opposite triangular towers were joined by a canopy of lights, echoing the majesty of a palace gate in the Han Dynasty.
This gateway symbolised the cultural exchange between China and other nations throughout their long history. The exhibits were created by cantilevers in the space between the two towers and linked together by glass bridges that offered visitors an alternative experience of opening and closing. At the back of the bridge was a cafeteria, a gourmet restaurant, and a plaza with a swimming pool surrounded by ancient pine trees.
Of the ten separate exhibition areas, the first four presented unique gifts from China to humanity, ranging from scientific or technological categories such as paper, printing, porcelain, and silk, to language and art, such as calligraphy and painting; the fifth exhibition presented the history of the transition from the past dynasty to the modern republic; The next four exhibits described advances in education, transportation, communication, industry, commerce, science and agriculture in today's Taiwan; and the final exhibit featured a stunning slide show of the island's wonders. Throughout, modern audio-visual communication techniques, such as films, slides, graphics, and photo walls were used.

The pavilion, despite Chinese heritage and progress, was intended to express the Confucian ideal of "Tien Hsia Wei Kung" or "One world for all mankind".

The pavilion of the Republic of China, which conveniently dominated the Expo's Festival Square and the Sun Tower.